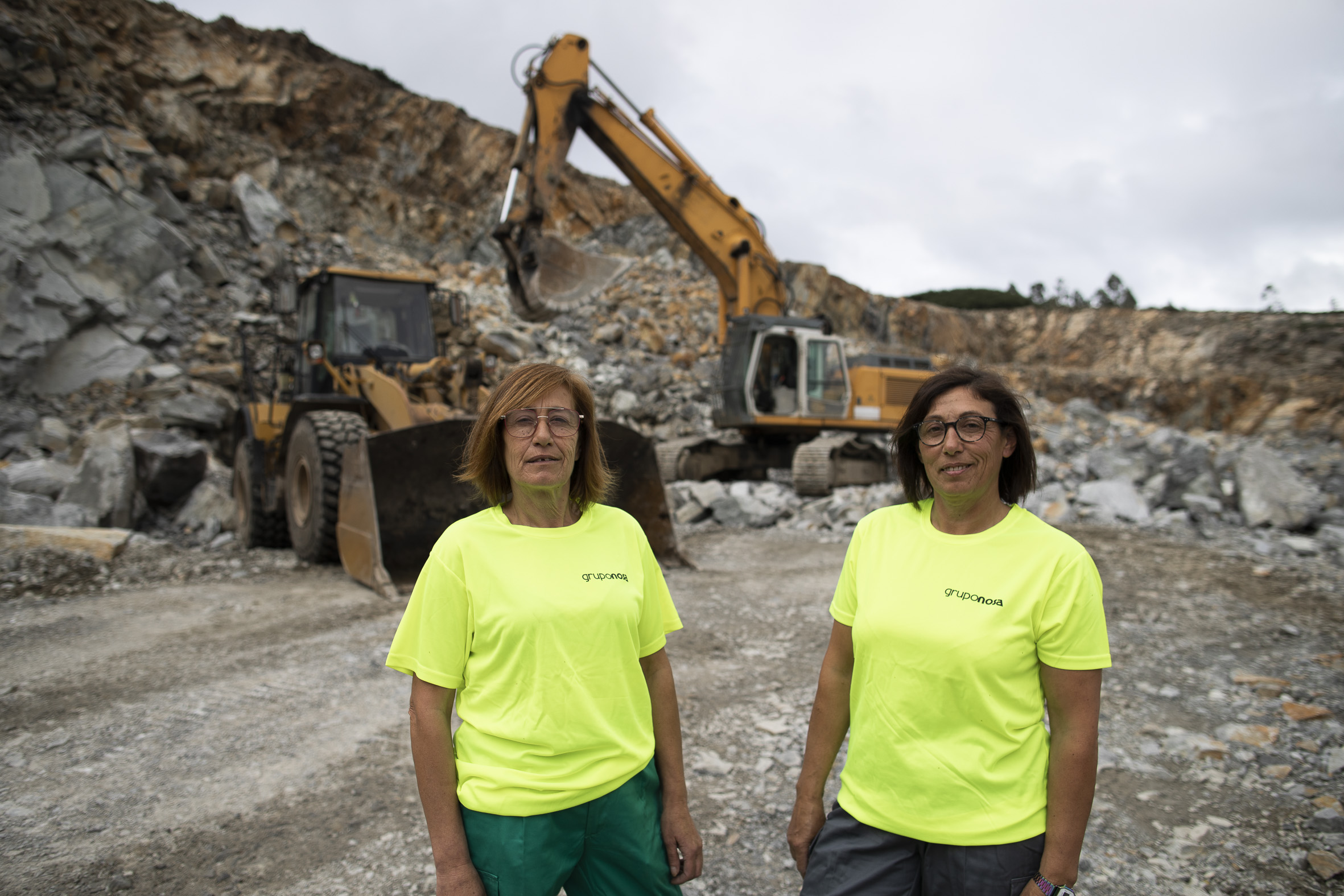 By chance. This is how Manola Torrado Coto ended one good day 17 years ago, converted into a paddler and handling explosives in her hometown of Boiro (A Coruña). One morning in 2005, leaving work at a canning factory with two friends, she considered asking for a job at the mine. “It was three in the morning, we were very tired of chain work at the cannery, cleaning fish against the clock on a line, and we yearned for something less harsh,” Torrado recalls. One of her friends commented that in the Nosa Group (Nemesio Ordonez, SA), a family business owned by Boiro himself, were looking for paddlers for the aggregate treatment quarry. And there they stood. They hired them.

After more than 15 years, she is still on a shovel or a dumper (a truck for the transport and dump of light materials) as well as his sister Fátima, who joined three years later. They assure that they have the same working day, salary and opportunities as their male colleagues and they will tell their experience at the II Women and Mining Symposium that will be held in the middle of the month in Santiago, coinciding with the celebration, on June 15, of the International Day of the Woman in Mining.

That early morning in 2005 when the three employees of the Boiro canning company decided to ask for a job at the mine, Manola Torrado was 34 years old and had two small children. “The boss kept asking us if we were sure we wanted that job. He told us to stop by to see what it was all about and he gave us the opportunity. We do not doubt it, ”she says, still grateful. Her friends were assigned to the recycling area and she was hired as a paddler. She had never been on such a machine, so she openly said that she did not know how to drive it, but the businessman was clear: “If you know how to drive a tractor, you already know how to drive this.” She had been on a tractor a thousand times since she was little. She has now been handling the shovel for 17 years and she has also worked with explosives.

If what happened to Manola Torrado was the result of chance, what happened to her sister Fatima, a year younger, too. Like her, she was tired of her job, in her case as a bread delivery girl around town. “I didn’t find out from Manola; A neighbor told me that they were looking for people for the mine and that was not on my mind at all, ”says the youngest of the Torrados about her experience, which began three years after her sister.

She was immediately hired to operate a backhoe and a dumper. “The retro one cost me a bit, it’s 50 tons… So I started in a smaller one, but now I also handle the one that breaks stones and also explosives. The company does public works and when necessary I go with the hammer machine and the truth is that everyone is freaked out when they see me up there”, he says, after 14 years of experience in the mine, an open-pit operation using large blasting over an area of ​​about 200,000 square meters to obtain aggregates.

The Torrado sisters claim to have been received with “complete normality” by the rest of their colleagues despite the fact that they are the only ones who work in the mine, along with another colleague, of the more than 80 women employed in the company, most of them in positions of administration. “It is true that at first it shocked them a bit. I started in September and I remember that my colleagues told me that I would not be able to endure the winter with the rains and the cold working in the open, but that was not the case”, explains the oldest of the Torrados, pointing out that she has never suffered harassment “but everything contrary”: “We are a family”. She assures the expert paddler that she draws more attention to those who come from outside with trucks. “When they see us in the machines they tell us to be careful, let’s not hit them…”, she acknowledges.

If machismo is not present among colleagues in the company, it is latent in the sector. Seeing women in traditionally male jobs in the mines is still almost a mirage. According to statistics compiled by the Ministry for the Ecological Transition and the Demographic Challenge (Miteco) with data referring to 2019, only 8.53% of employees in this sector are women. The platform Woman in Mining Spain It also figures around 8% the presence of women in the mining sector in Spain. And of that 8%, almost 30% hold administrative and technical positions and only 3% are in production positions. The percentage increases somewhat in the case of Galicia, which leads the national and international export and turnover markets (about 600 million euros per year) with granite and slate as the main products.

In the Galician community, the percentage of female employment in the mining sector is 9.74%, with 334 women out of a total of 3,428 employed persons. The proportion is higher on the board, where there are 232 women hired out of 1,625 employees. However, the largest number of women hold technical and administrative positions with 28.57%, being practically symbolic, 3.35% of those who carry out their work in production positions.

For the families of Manola and Fátima Torrado, their jobs are a source of pride. Fatima, married to a sailor who spends long periods sailing and returns from vacation, remembers the day her son reflected when his mother came home from working with explosives and his father had done the housework and had food on the table. “You have to see how things have changed in this house!” exclaimed the boy, now a 31-year-old computer programmer.

Manola’s children are also proud. “My mother had a hard time understanding it, but she immediately began to show off,” says her daughter, who was already at the University (she is now 31 years old and is a chemical engineer), she valued it very much. The little boy, now a telecommunications specialist, was only eight years old. “Since women work in the canning factory here, I took him to the mine one Saturday to see where her mother worked” and everything was normal, she says.

The two sisters make it clear that physical strength is not needed, but skill and determination to carry out their work. “It’s all a matter of practice; It is not hard work at all”, they point out, happy to have left their previous jobs. They are the visible heads of a sector that is still practically unexplored by women. There are no girls in charge of a dumper nor of a backhoe in toy commercials. The Torrado sisters admit that as children they played with Nancy dolls, although they have always loved driving. Both now aspire to retire uploaded to their respective machines. “We can not imagine another job that is not something like that,” they settle.