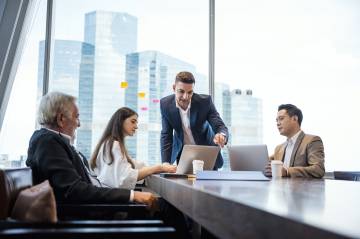 The negotiation to renew the collective agreement of the consulting sector seems to be getting more and more stuck as the weeks go by. Employers and unions keep their positions very far apart and, although they have resumed talks, the announcement of a strike on June 23 threatens to paralyze activity in an area that some and others agree on defining as “strategic for the economy”.

The unions reproach the Association of Consulting Companies (AEC) for its attempts to perpetuate tables of professional categories and salaries that do not correspond to the reality of this activity and for leaving companies absolute freedom to impose 12-hour working days. “Thanks to an absolutely arbitrary professional classification, what many companies currently do is hire graduates as a programmer under the heading of area 1, referring to “technical and/or administrative support” functions, which includes the salaries of lowest starting point”, says Raúl de la Torre, coordinator of the ICT Services sector of CC OO.

The unions explain that in this way and, given the laxity of the agreement, the companies manage to pay wages ostensibly lower than those that would correspond to these professionals due to their degree of education, training and responsibility. “This is done above all by companies that subcontract certain jobs. They take the contract by price and then they have to pay less if they want to maintain reasonable margins”, describes De la Torre.

With the salary tables currently in force, there are a dozen categories in which salaries are below the minimum interprofessional salary (SMI), which the Government has recently raised to above 14,000 euros gross per year. And yet, the entry fee in many large supermarket chains for the lowest categories exceeds 20,000 euros gross per year. Precisely in that range is where they want to set the minimum of what a higher degree should earn in this sector, in those 20,000 euros per year. “Large companies have just presented record results and their forecasts in the short and medium term are very positive”, recall the unions.

The employers, for their part, and always according to CC OO, only propose to regularize the categories that remain below the SMI and bring them to just over 14,200 euros for the administrative area and the management of means and processes and raise the salary to 14,630 euros per year in the case of the consulting area. “They seem to us to be clearly insufficient steps,” De la Torre insists. The workers’ representatives demand a radical change in these tables and the inclusion of new professional categories such as one specific to cybersecurity.

In this context, UGT and CC OO understand that the bosses have not changed their attitude, so they are going to maintain the scheduled mobilization schedule. The next protests, the specific dates yet to be determined, will focus on campaigns to publicize this precarious situation on social networks, firstly aimed at companies in the sector, but also at their main clients. And then they do not rule out the call for partial strikes and even a general strike, on June 23.

Society has to know that we cannot afford to continue being the second worst paying country in Europe for professionals who, among other functions, develop the digitization of our economy, they say.

The negotiation of a new agreement for the consulting sector has been stalled for almost two and a half years and the unions recall that the one in force now took nine years to update, so it is not new, in their opinion, that interest of employers for delaying the talks.

Also Read  Almeida's latest budgets: lower taxes and 9% more for the district of Salamanca than that of Puente de Vallecas | Madrid | The USA Print

CC OO accuses the AEC of trying to further precarious the conditions of its templates. “They continue to cling to the idea of ​​regulating the so-called service hours by agreement, allowing them to force people to work from Monday to Sunday, without any additional compensation, if the clients so require, with a simple notice of five days”. “They modify their claims to be able to individually impose shifts of up to 12 hours of effective work,” the union denounces.