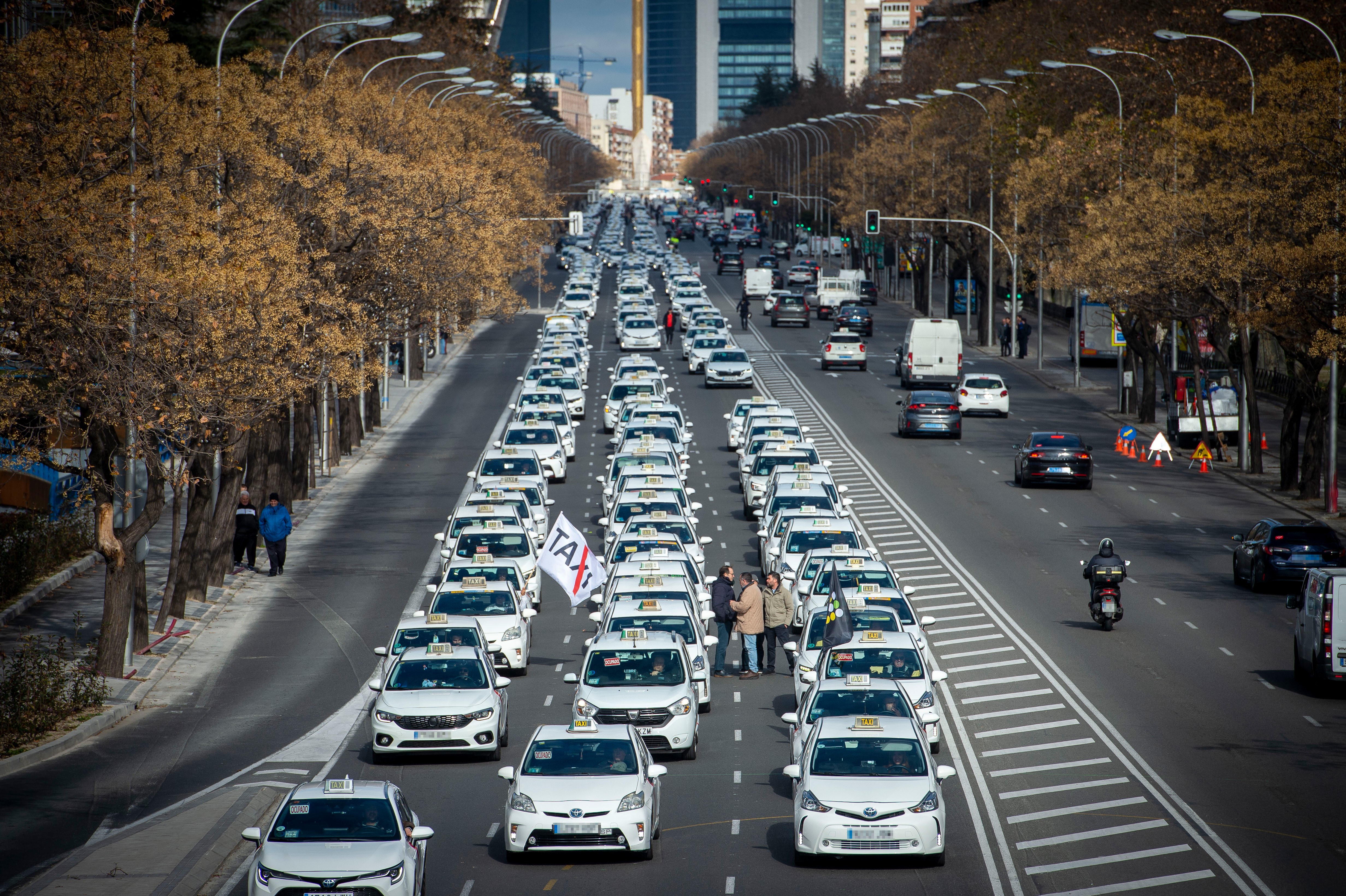 Madrid taxi drivers have occupied the Paseo de la Castellana with their vehicles this Tuesday to protest against the regulation promoted by the president of the Community of Madrid, Isabel Díaz Ayuso. The numbers of participants range between 3,000, according to the Government Delegation, and 6,000, according to the organizers of the march, the Professional Taxi Federation (FPTM). The confrontation between the regional government and the federation is caused by several hot spots: the increase in licenses per driver, which would go from three to 50, liberalize work hours and eliminate fixed rates.

Twelve days after the last demonstration, the caravan called by the Professional Taxi Federation (FPTM), has traveled the central lane of Paseo de la Castellana from Plaza de Castilla to Nuevos Ministerios. The protesters have lined up the street of Raimundo Fernández de Villaverde to the headquarters of the Madrid Ministry of Transport and Infrastructures, in the Maudes Palace. Although the federation’s count is around 6,000 protesters, they also indicate that they have received complaints from many taxi drivers who have not been able to enter the call due to lack of space and have estimated the professionals who have supported the call to be around 9,000.

This regulation, which would replace the one in force since 2005, “intends to precariously, speculate and facilitate the accumulation of licenses in the hands of companies” to the detriment of the self-employed taxi drivers, according to what the president of the FPTM, Julio Sanz, told journalists. The leader of the march believes that this measure will allow there to be “company networks” that in a short time can be done with the taxi collective, until now made up of self-employed workers. The fear of the taxi sector, which held a referendum on October 15, 2022 in which 95% of the 9,000 participants declared themselves against this draft decree, is that the taxi sector resembles the platforms of Rental Vehicles with Driver (VTC), “a sector with speculation, insecurity and labor exploitation”, denounced Sanz.

Sanz has also cited different reports that reflect that the VTC model generates “disorders” in congestion, traffic and air in cities. In addition, it has accused the VTC companies of entering the market and “attacking everything with a policy of lowering prices, speculating and injecting countless millions for later”, according to different consumer organizations, “when they have installed themselves and have Caught customers raise up to 57% more prices”.

In the debate on the state of the region, the Madrid president, Isabel Díaz Ayuso, announced that the Madrid government was finalizing the regulatory developments for taxis and VTCs, which will mean “significant improvements for both license holders and users”, with which they will be able to see billing multiplied and improve the service. With the new regulation on which they are working, taxis “will be able to circulate freely whenever they want, 24 hours a day, every day of the week, and services through shared cars will be authorized, where users can reserve a single seat in a vehicle that has to other people, thus reducing the price for each traveler”. With the time freedom, taxi drivers will be able to earn up to 60% more per month for license and create some 3,000 new jobs, according to the Madrid president.

The socialist spokesman in the Assembly, Juan Lobato, has gone to the Plaza de Castilla to show his support for the taxi sector, on which 25,000 families depend, and to defend “the right of all Madrid residents to have a public service that guarantees certain prices with specific conditions to be able to move around Madrid with quality”. Lobato has urged the regional government to “generate consensus” instead of “imposing” regulations to force the taxi sector to work 24 hours a day, seven days a week, while asking it to sit down “talk and dialogue”, which, in his opinion, is the opposite of what Isabel Díaz Ayuso and the PP do.

What affects the most is what happens closer. To not miss anything, subscribe.

Previous article
Follow these tips to avoid being a victim of tax fraud | The USA Print
Next article
Guatemala: private vigil and inhumane to ex-president Colom | The USA Print
The USA PrintMagazine For all
Facebook
Instagram
Twitter