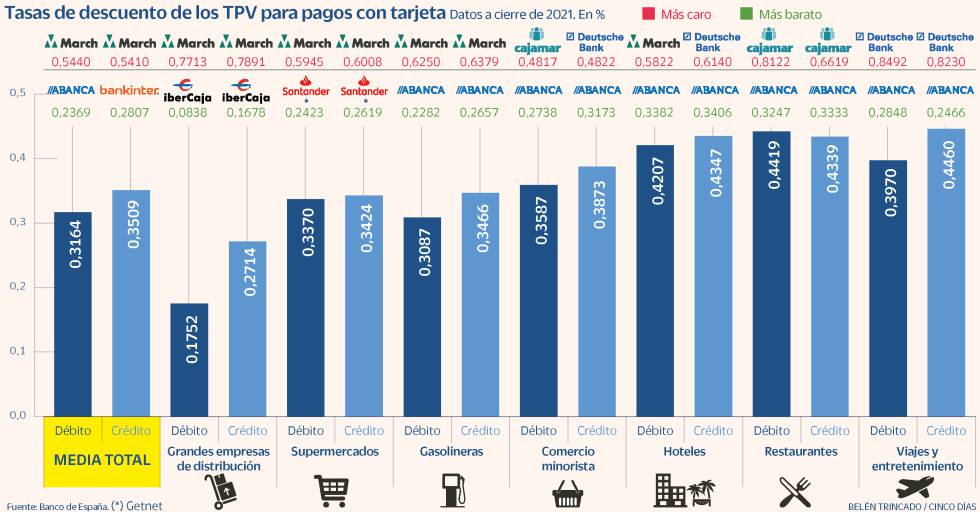 Take out the card, place it on the dataphone and insert the pin. Plastic money payments have become popular among consumers in recent years and are already threatening cash as the preferred means of payment due to the convenience they offer. But this simple gesture has a cost for businesses. This is a small percentage (commission), called discount rate, which the bank that owns the POS charges the establishment for sales made.

Taking into account that in 2021 the average discount rate was 0.36% and that the volume of sales that were paid by card totaled 195,246 million (according to data from the Bank of Spain), businesses paid about 703 million last year millions to the banks.

In any case, it must be taken into account that these rates are averages and do not apply equally to all operations. According to the breakdown offered by the Bank of Spain by sectorsthe Hotels They are the establishments that bear one of the highest average commissions. Also travel agencies and car rental, massages, saunas and nightclubs. On the opposite side, the lowest average rates were applied to department stores, gas stations, supermarkets and retail. Likewise, it depends on each bank (see chart).

Also Read  Latam Airlines: The Latam airline emerges from bankruptcy after two and a half years | Economy | The USA Print

Debit cards are the preferred option for users. A At the end of 2021 in Spain there were 88 million cards in circulation, of which 38.55 million were credit and 49.44 million debit. However, despite having 11 million fewer units, credit cards are more profitable for banks in terms of POS payments, since the discount rates for merchants are higher.

According to the latest data from the Bank of Spain, the average commission that the bank charges merchants for debit card payments is 0.31% while for credit card purchases it rises to 0.35%, which is four basic points more.

Likewise, in most sectors the rates applied are higher when paying by credit card. to the establishments of the great distributionthe average commission applied to purchases made with a credit card is 0.27%ten basic points more than if the customer pays with a debit card.

Only in restaurants, the commission applied is lower in credit card payments: an average of 0.43% compared to 0.44% with debit cards.

Also Read  From Byung-Chul Han to Irene Vallejo or Harari: the essay takes off as a guide in a changing and uncertain present | Culture | The USA Print

The main banking employers’ associations have been defending in recent years that discount rates have been greatly reduced as the use of dataphones in businesses to accept card payments has spread.

According to the records of the banking supervisor, 20 years ago the average discount rate was 1.59%, four times more than now. That figure remained more or less stable until 2005, but since that year the commissions have not stopped falling. In 2007 they had already fallen by more than 50 basis points, to 1.02%, and just one year later they were already below 1% (they stood at an average of 0.88%). In 2011 it was 0.7%, so in the last decade they have been halved.