The unlikely cult celebrities that emerged in the trial of Johnny Depp vs. Amber Heard 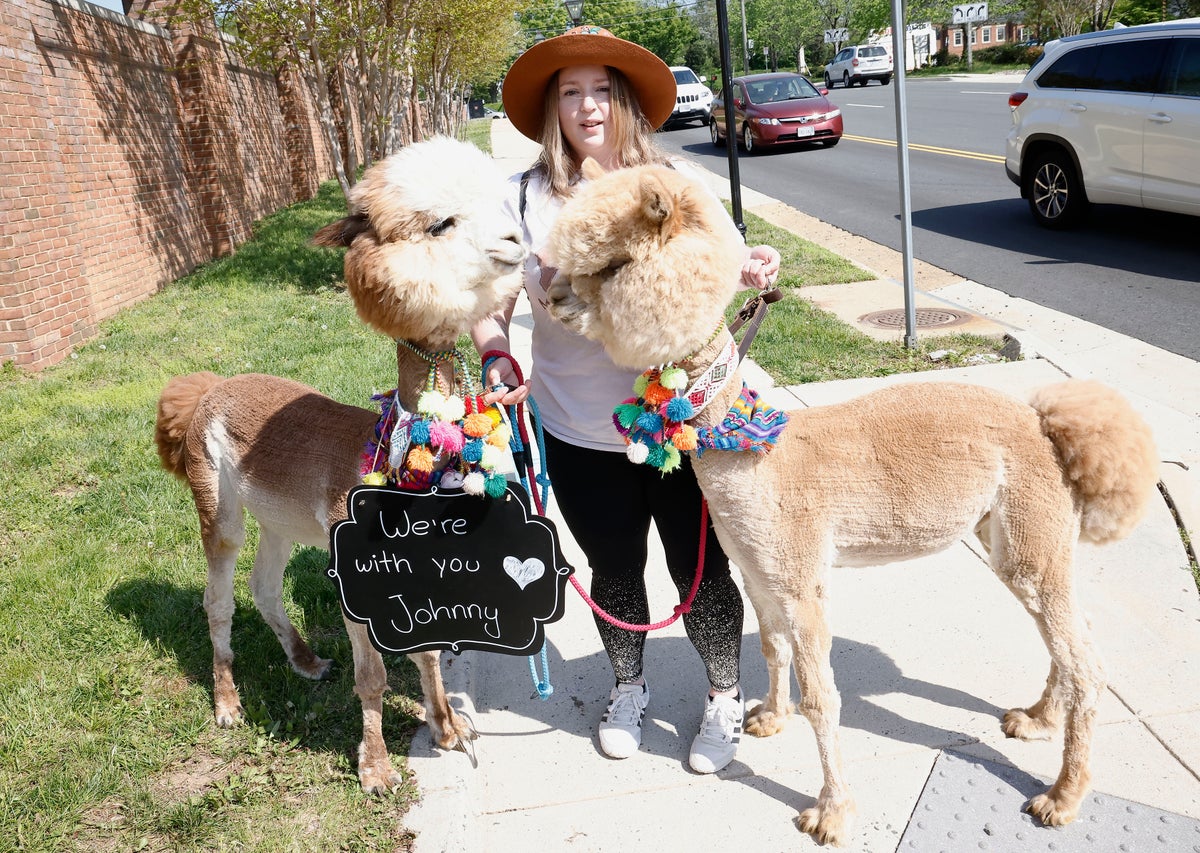 The jury in the bitter defamation trial of divorced Hollywood actors Johnny Depp and Amber Heard in Fairfax County, Virginia, has returned its verdict. Thus ends seven weeks of blockbuster drama which was devoured by online audiences around the world.

Depp, 58, sued Heard, 35, for $50 million over an op-ed she wrote for Washington Post in December 2018 in which she spoke about domestic abuse and having faced “the full force of our culture’s anger toward women speaking up.”

Although Heard did not name Depp, to whom she was married between 2015 and 2017, her legal team argued that newspaper readers would likely assume he is the person responsible for the ordeal she alluded to and claimed that the article caused her client lost lucrative movie roles.

Heard countersued Depp, whom he met when they played a pair of lovers in The Rum Diary in 2011, for $100 million, arguing that she was the person defamed by his lawyers due to claims that her victimization amounted to a “hoax.”

Fans of the estranged couple have exhaustively documented every move and gesture of the plaintiff and the defendant in court, the arguments of their lawyers, the interventions of the judge, and a host of colorful witness testimonies on TikTok, Instagram, and Twitter, turning what could have been a formal legal process in a spectator sport.

All of which has drawn disapproval in some quarters, with concerns expressed that the real issue at the heart of the case, domestic violence, was being lost in what became a tawdry viral soap opera.

While those criticisms are more than valid, there is no doubt that the trial has provided extraordinary spectacle and an unforgettable cast of supporting characters who have become unlikely cult celebrities.

In the first place, it is fair to raise a “mega pint” in honor of the woman who oversaw the entire circus with impassive sanity, humor and, at times, endearing bewilderment.

Quick to restore order when laughter broke out in court, especially when Depp admitted he didn’t watch his own moviesJudge Azcarate kept her composure admirably, and who could blame her for being somewhat stunned when the lawyers objected to her own lines of questioning?

Depp’s glamorous lawyer, in particular, became a unlikely social media star during the trial, inspiring various fan accounts, memes that compared her to Marvel heroes Thor and She-Hulk, and even a rumor of her dating her client, a suggestion to which she he replied with a polite laugh when asked about it by a TMZ reporter directly on the courthouse steps.

A Affectionate hug between Depp and Vasquez on May 17 only encouraged the TikTok crowd to imagine a romance between them, but Judi James, a more cynical body language expert, told TheDailyMail that it could all be part of his strategy: “For loyal Depp fans, these dramatic rituals will seem like validation… ‘If this beautiful and intelligent woman thinks he’s good, then maybe he is’ would be the implicit message” .

Vasquez cemented his popularity among #JusticeForJohnnyDepp die-hards by raising an extraordinary number of quick objections to a summary by Heard’s attorney, Elaine Bredehoft, leaving the latter to comment in exasperation: “I’m trying… I’m trying.”

Speaking of Vasquez’s opponent, Elaine enjoyed her fair share of memorable moments during the proceedings, most notably eliciting a smile from the plaintiff as she lowered her voice to mimic his own as she read a transcript of a tape in which Depp had testified. : “You will never look me in the eye again.”

More seriously, the attorney prompted a poignant sentence from her client when she asked Heard why her ex-husband can’t look her in the eye now, and she replied, “Because he’s guilty. He knows that he is lying. Why can’t he look at me? I survived that man and I’m here and I can look at him.”

Later, Bredehoft surprised even Depp when he asked airport security officer Beverly Leonard if he had only come forward as a witness so “you could get on TV.”

His deputy attorney, Adam Nadelhaft, became famous when raised a “hearsay objection” during his own cross-examination to Ben King, the manager of Heard’s house.

“But you asked the question,” a puzzled Judge Azcarate replied, eliciting embarrassed stutters from Nadelhaft and giggles from the opposition bench.

The janitor of the Eastern Columbia Building in downtown Los Angeles, where Depp owned five penthouses and lived with Heard for three years, Alejandro Romero provided the court with a completely weird prerecorded statement on April 28.

Filming behind the wheel of his car, impatiently drinking soda and smoking, Romero showed an exasperated figure and was clearly uninterested in answering Bredehoft’s questions about an incident that occurred in May 2016 when police were called to the complex to respond to a heated dispute. between the couple.

“You sent me the papers to review, and I didn’t even want to review them because it’s been so long. I just don’t want to deal with this anymore,” she complained.

Another famous witness was this grey-haired Scottish bodyguard, who had been assigned to protect Depp when he was in Australia filming Pirates of the Caribbean: Dead Men Tell No Tales in 2015.

Connolly won a legion of fans when he was asked on May 2 about an incident in which he was forced to intervene in another domestic argument between the couple, but was left baffled because Heard’s lawyers insisted Depp had been urinating on the toilet. hallway when he entered the apartment building in question.

The security guard denied this detail but his interrogators insisted: “Mr. Depp had his penis out, didn’t he?”

Perplexed, Connolly exclaimed the immortal answer: “I think I would remember if I had seen Mr. Depp’s penis”, which provoked a laugh from the actor.

The psychiatrist was questioned on May 23 about his earlier claim that Depp’s use of a headset on set, so that key dialogue could be played to him, could indicate a disability or mental decline as a result of drug abuse. and booze.

“I don’t think actors routinely receive the entire script through headphones,” Dr. Spiegel said. “I find it hard to believe.”

This caused an intense exchange about whether legendary actor Marlon Brando, with whom Depp worked on his directorial debut The Brave in 1997, he once wore one.

“What is not dead? So the answer is no, he doesn’t wear one now,” Dr. Spiegel replied, taken aback, as Depp struggled to hide his grief.

Dr. Spiegel was also forced to recant when he was accused of calling the star an “idiot” and later discovered that his WebMD and Google pages had been hacked. inundated with negative reviews from angry Depp fans.

told to The Independent: “I’ve always believed that an individual’s hero should be someone the person knows and not someone they think they know, so this level of disappointment is avoided.”

The hysterical fan escorted out

There was a commotion in the public gallery on May 23 when one of Depp’s followers had to be withdrawn after suddenly yelling, “Johnny, I love you! Our souls are connected… This baby is yours.”

The target of his call simply smiled and waved.

The former TMZ employee, who testified for Depp on May 25, offered a scathing response when Bredehoft suggested he had only come to get some of the attention the case was generating.

Questioning Tremaine about his work for the California gossip website, which led him to send paparazzi to photograph Heard during the breakup of their marriage in 2016, the attorney asked him if he was looking for his “15 minutes of fame” by speak on behalf of the Hollywood veteran.

The witness replied sarcastically: “I could say the same about you for taking on Amber Heard as a client.”

As the process drew to a close last week, Judge Azcarate thanked the legal teams involved and all the court staff present for their professionalism at all times, before highlighting Judy, the court reporter, whom she called a “rock star”which earned the official a round of applause and laughter in the courtroom.

A true cult icon online, where many viewers believe she has a secret crush on Mr. Depp due to certain occasional seemingly lovesick looks; she even has her own hashtag.

Last but not least, these two alpacas were taken to court regularly by Johnny Depp fan Andrea Diaz, founder and owner of My Pet Alpaca, a business reportedly started during the pandemic to provide emotional support. to the kids.

The animals became fixtures in the proceedings, and both Vasquez and associate attorney Ben Chew posed for photos with them.

Interestingly, the question of the alpacas also came up inside the court.

In a pre-recorded statement from Disney executive Tina Newman, she was asked if the corporation would actually be willing to pay US$300 million and one million alpacas to reprise his role as Captain Jack Sparrow in the franchise of Piratesas the actor had jokingly suggested.

Newman replied “no,” saying the matter was “above my pay grade.”