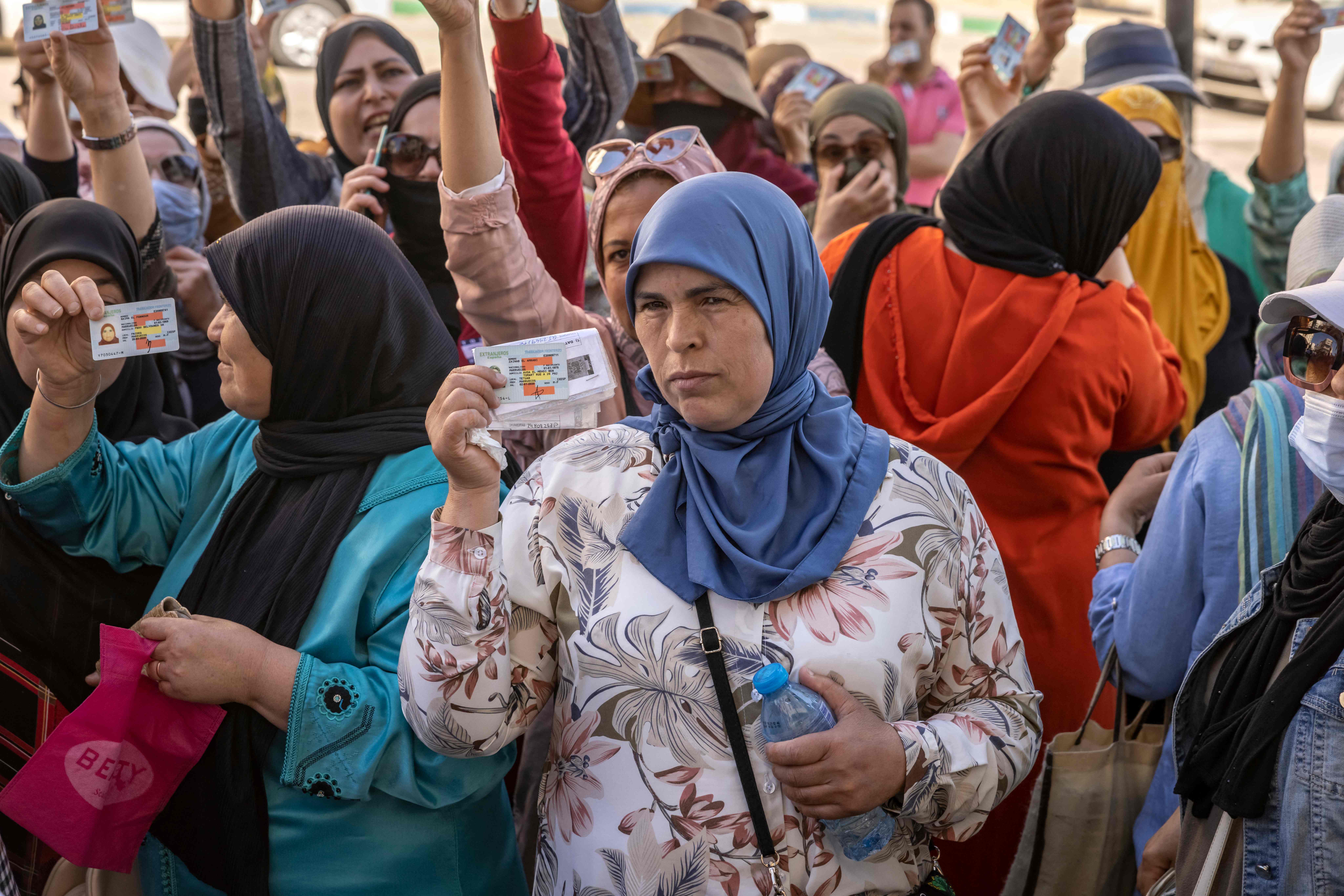 Some 200 cross-border workers gathered this Tuesday morning in the Moroccan city of Fnideq (formerly Castillejos) to demand the granting of visas with which to regularize their situation in Ceuta. In northeastern Morocco, opposite Melilla, dozens of people also gathered at the Beni Enzar border crossing. The date agreed by Spain and Morocco to allow the entry of these employees was this Tuesday, May 31. But not a single worker has crossed the steps, according to sources from the government delegations of both cities. The peaceful concentration in Fnideq was controlled at all times by the police, who recorded the protesters, as is usual in Morocco. Also in Beni Enzar there was a strong presence of agents.

Most of the workers complained that they cannot obtain their visa to enter Ceuta and Melilla because, after two years of closed borders, their former employers have already hired other people and do not want to register them. With the entry restriction still in force, workers who have lost their contract due to the pandemic will not be able to enter Melilla even to look for work. Each case offers its peculiarities, but all workers claim a visa to get their jobs back.

The promised visa, valid for one month, only allows you to cross once to complete the paperwork. And to achieve this, the contract and the authorization of the Delegation are essential.

Latifah is one of those lucky ones, even if she can’t cross at the moment. She lives with her two children in Beni Enzar and has been hired as a cross-border worker in Melilla for years. “My boss has told me that she will make me the contract again, but they have to send it to me,” she explains by phone from Beni Enzar.

The concentration that has been registered in the municipality of Fnideq, with 77,000 inhabitants, offers a good example of the labor and financial problems that the closure of the border has caused. Habiba Cherdoud, 59, wants to cross to Ceuta to collect the pension of her dead husband. Her last payment, of 500 euros, was received in November 2019. Next to her, Mohamed Baghoul, 54, says that she had been working at the Maruja chocolate shop in Ceuta for more than 10 years. “And now I call my boss and he doesn’t pick up the phone.” Fátima Zahra, 36 years old and in possession of a diploma as a caregiver for elderly women, explains that she spent 13 years working with insurance, that her “wife” has already died and that now she wants to enter to look for work.

The problem is that only those who prove that they have an employer willing to hire them will be able to enter Ceuta and Melilla. “What is not wanted,” says a source from the Government Delegation in Ceuta by telephone, “is that there are workers who enter here without a contract to work in the underground economy, which was what happened before. With that you want to end. That is the agreement reached by the two countries.”

Chakib Marwan, head of the Moroccan Union of Frontier Workers in Tetouan, assures that in the cities near Melilla there are about 5,000 employees and in those in the province of Tetuan, near Ceuta, 3,600. But there are no official figures. In any case, these are thousands of people who have been out of work for more than two years, who stayed in Morocco during the pandemic and who now aspire to obtain a visa to return to work in Ceuta or Melilla.

Rahma Sbchi, 53, explains: “Here everyone has children, houses… We don’t go hungry, but we live very badly. We have all been working in Ceuta for many years and suddenly we find ourselves empty-handed”. Many complain that the people they worked for for years are now not getting back to them.

“And now everything has changed”

A worker provided this newspaper with the message left several weeks ago by her former employer in Ceuta: “Look, Mina. You know that I have taken a girl. Because she’s been alone for a long time and I couldn’t. And now everything, everything has changed, Mina. There is a lot of paperwork, a lot of money. I can’t spend that money, Mina, because I don’t have it. I remember you very much, we all love you very much, you know that you have been very well here, that you have had your doctor, your ticket, you have had everything… We have all loved you very much and we continue to love you. And I wish you to take good care of yourself. Many kisses and a hug from all of us. Goodbye, daughter, goodbye.”

Also Read  Shakira denies a sentimental courting together with her surf teacher: "I wouldn't have a associate" | Other people | The United States Print

Fatima, a 65-year-old woman requests that her last name be withheld because she does not want to harm the family that hired her in Ceuta. She explains that when the border was closed due to the pandemic in March 2020, the family she worked for continued to send her money for eight months. A month ago, when she found out that they were going to open the border, she called her employer to renew her papers. “And she told me that they love me very much in the family, that they can continue to give me money for me and my children, but that they can no longer hire me.” Fatima, however, does not want that money. “Because that lasts one or two months. What I want is to work, to have my papers. I have a doctor in Ceuta, because I have a serious heart disease, I have a Bankia card. And I don’t want to give them legal problems or anything, I just want to work.”

Sources from the Government Delegation in Ceuta indicated that the Department of Immigration, in Ceuta, will begin to give appointments as of this Wednesday to process an average of 30 or 40 cases per day. “The people cited are those who, with their special visa, will be able to regularize their situation,” said the same source. “The employer will have to register them with Social Security to complete all the Immigration procedures and so that they can have the border worker card.”

After two hours the demonstration dissolved in a very orderly way in Fnideq. The police made sure that women and men returned to their homes without forming large groups. Abdelmalik Zerrad, a 44-year-old bricklayer, who had been listed in Ceuta for 12 years, assured before leaving that his boss has told him that he has already hired another person. “I don’t mind. But at least, that they pay me the settlement, ”he said.

Also Read  William Levy's 'revenge': “As a young man, in Cuba, I experienced too many injustices” | TV | The USA Print

Ukraine - Russia war: latest news live | Putin equates the "crimes" of Ukraine with those of the Na...
How to apply for the American passport for children in Miami and the USA | The USA Print
A green comet with an anti-tail: the secrets of a peculiar phenomenon that can be easily seen | Sci...
How to get a job in the US with a new immigration parole | The USA Print
Divya Chander, neuroscientist: "Just like a phone, our neural code can also be hacked" | The USA Pr...
Telefónica strengthens itself in the submarine cable while expanding the alliance with Amancio Orteg...
'LLYLM', Rosalía's new song, is already circulating on WhatsApp twelve hours before its premiere in ...
Elon Musk meets with Democratic and Republican House leadership | The USA Print
AI: The second green revolution will be digital | Expert network | future planet | The USA Print
AP EXPLAIN: A look at Brazil's Yanomami crisis | The USA Print
The obstetric fistula: the "wound" that punishes the most vulnerable women | future planet | The U...
US restaurants face staff shortages | The USA Print
What happened to the licorice stick? Story of a natural candy | The USA Print
Santa Ana winds topple trees in Southern California | The USA Print
Mexico finds 57 teenage migrants packed into a truck | The USA Print
The 'North Koreanization' of Nicaragua: Ortega restricts tourists from bringing cameras and binocula...
Chile maintains interest rate at 11.25% in the face of high inflation | The USA Print
Jupiter, first among his own, king of life, lord of seven planets, protector of the kingdom | Cosmi...

Previous article
Reparation for Luis Ceccón, the police victim of a “death flight” in Argentina | The USA Print
Next article
Morena denounces the deputies who voted against the electricity reform for “treason against the country” | The USA Print