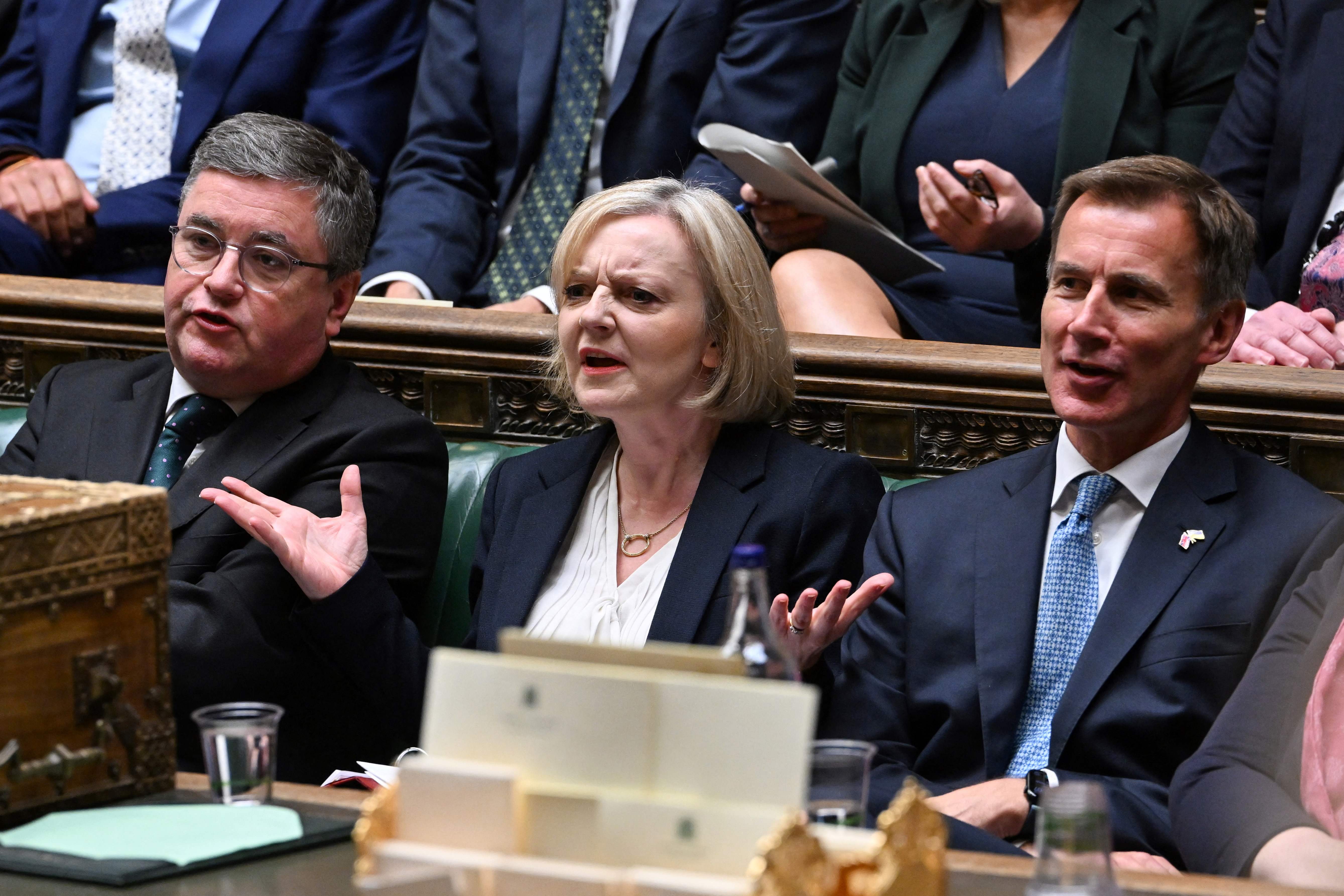 The first sign of internal breakdown of a party is the exaggeration of emotions, but Wednesday in the United Kingdom will be remembered as one of the stormiest in its political history. “This is chaos, and most of my colleagues are fed up,” veteran Conservative MP Charles Walker told the BBC. “We have to regain control. The adults of the party, and there are still a few, must meet in a papal conclave for the next few hours and decide among themselves on a coronation,” Walker suggested, after a tragic night in the House of Commons.

After several decades in the conservative caucus, Walker is one of those who has announced that he will not stand in the next elections, the ideal condition to freely attack Prime Minister Liz Truss and the disasters caused by his brief mandate. That is what the UK Conservative Party is all about today. Only those deputies who are part of the Government are silent, or make timid defenses of the still head of Government. The rest prepare for the worst or conspire to change leaders as soon as possible. Truss has met this Thursday morning, as confirmed by Downing Street, with Graham Brady, the deputy responsible for organizing internal motions of censure or calling new primaries. He is also the leader of the majority of the parliamentarians without portfolio, among whom the requests for the resignation of the prime minister accumulate. The meeting was joined by the president of the Conservative Party, Jake Berry, and the deputy prime minister, Thérèsse Coffey. A clear image of a Government in a clear crisis situation.

At least 15 MPs have publicly expressed their desire for Truss to resign. In private, according to some British media, there would already be more than 100 “letters of withdrawal of confidence” that have reached the mailbox of Graham Brady, the president of the 1922 Committee. It is the body that brings together the backbenchers (literally, the deputies of the rear benches). They are the majority of parliamentarians, those who do not occupy any position on the government steps, and, therefore, the freest to rebel against a leader who does not convince them. The statutes of the Conservative Party give Brady the organization of both an internal vote of no confidence against the prime minister —in the event, obviously, that it is tory— as of a new primary process.

It was Brady who met with Boris Johnson to explain the state of mind of his deputies and suggest that he throw in the towel. This Thursday afternoon he meets with the members of the leadership of the 1922 Committee, and many Tories they want him to be the one to tell Truss that the battle is over. “I had high hopes for Liz Truss’s mandate, but after what happened last night I think her position is already untenable. I have also sent my letter to Graham Brady ”, Sheryll Murray, one of the deputies who came out in defense of the prime minister when it still seemed possible that she could control the chaos created by her tax cut, wrote on Twitter.

Also Read  Carol Pires: “Bolsonaro is the result of the criminalization of politics” | International | The USA Print

A parliamentary group in rebellion

“Liz Truss needs to go as soon as possible. Her successor, whoever she is, must be someone capable, competent and able to communicate effectively”, Eurosceptic David Frost wrote in the Daily Telegraph. Just a few days ago, he himself asked him to resist the pressures of what, according to him, was a coalition of leftists and globalists, from the daily Financial Times to the EU or the International Monetary Fund. It is the clear demonstration that Truss has been left without flanks (neither in the center, nor on the right, nor on the extreme right) to defend her. “He has 12 hours left to try to save his position,” said the veteran deputy tory Simon Hoare first thing this Thursday. Without any data, beyond that those were the approximate hours until Truss’s meeting with Brady. And yet, no one has questioned that, more or less, that could be the rest of the political life that the prime minister has left.

Wednesday night’s vote was in the Downing Street playbook to use Parliament to their advantage. In 2019, the Conservative Party had promised in its electoral program that the fracking (the hydraulic fracturing technique to extract hydrocarbons from rock) it would remain banned in the UK “until science has categorically shown that it is a safe method”. Truss waged a neoliberal campaign of low taxes, deregulation and aggressive decisions to win the leadership of the party this summer. And he promised, among other things, that he would lift the ban. The energy crisis resulting from the invasion of Ukraine, he explained at the time, made it necessary to ensure the national gas supply.

The trap laid on Wednesday by the Labor opposition was also manual. They promoted an urgent motion in the House of Commons to definitively prohibit, by law, the fracking. It was a complicated dilemma for many conservative deputies, aware of the rejection that this practice of extraction provokes among their voters. The normal thing would have been that the Government had not imposed voting discipline. He knew he could defeat, however narrowly, Labour’s attempt to fish in rough waters. But Truss, desperately needing to demonstrate his authority, issued the call three-line-whip (the triple whip). In British parliamentary parlance, whip (whips) are the deputies who transmit the will of the Government in a vote, control their colleagues and ensure discipline. The triple whip It is the way of indicating that any deviation from the slogan would result in the withdrawal of the condition of conservative deputy and the expulsion of the parliamentary group. In the jargon, again, lose the whip (lose the whip).

Truss’s team conveyed to her MPs that she interpreted the ongoing vote as a “motion of confidence” in the prime minister. The ordeal was clear. That is why, when, at the end of the debate, the Secretary of State for Energy, Graham Stuart, —in a state of mental confusion similar to the one Downing Street is experiencing these days— was unable to define what exactly was being voted on, anger between the Tories. Deputy Ruth Edwards, demanded clarification, reproached the group’s leadership for forcing them to vote against their own electoral promises and told them that “they should hide out of sheer shame.”

The voting method of the House of Commons is so peculiar that it has created a universal jargon. The deputies are divided into two corridors, on each side of the Chamber, to express their position. For or against the legislative proposal. That is why voting is called divisionand so the exercise of trying to convince – or pressure – MPs to go down one corridor or another is known as lobbying (walk around) On Wednesday night, according to some present, the corridor acquired an unusual aggressiveness, to the point that the speaker (Speaker) of the House, Lindsay Hoyle, decided to open an investigation. Some Labor MPs say they witnessed scenes of shaking, shouting and harassment by the whip conservative about their peers.

Such was the chaos that, for a few hours, it was evident that the chief whip (the head of the parliamentary group, with ministerial rank), Wendy Morton, and her number two, Craig Whittaker, had exploded right there and announced his resignation. They felt unauthorized by a government that, after forcing them to impose strict discipline, sent a Secretary of State incapable of explaining what was happening there to debate in the Chamber. And, above all, they felt overwhelmed by the anger of their peers. Truss had to work hard to convince Morton not to leave the ship. At half past one in the morning (half past two, Spanish peninsular time), Downing Street issued a statement in which it assured that Morton -who was seen entering this Thursday, early in the morning, at the residence of the prime minister – remained in his post, that the vote should be interpreted without a doubt as a “motion of confidence” and that, in the coming days, the excuses and justifications of the 40 deputies who did not vote, or voted in favor of the Labor motion, to adopt “proportionate disciplinary measures”.

Also Read  "Folks lately imagine much less in an alternative choice to capitalism, the marketplace is God" | The United States Print

Previous article
Rafael Grossi: “Putin is extremely focused and knows in detail what happens at the nuclear power plant” in Zaporizhia | The USA Print
Next article
France repatriates 40 children and 15 women from ISIS family camps in Syria | International | The USA Print