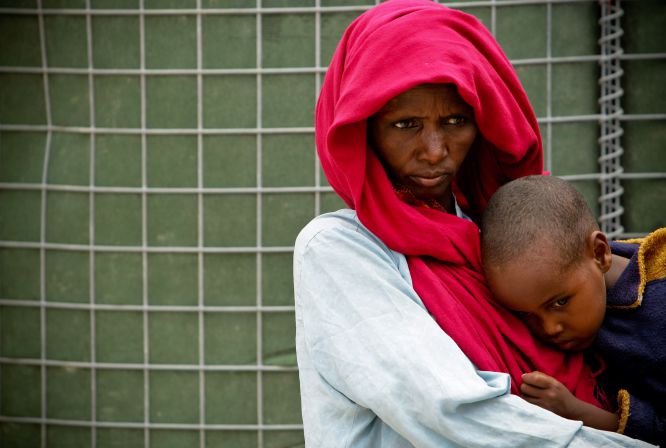 Climate change has already increased global temperatures and, in particular, the most extreme ones. This is a trend that will not be reversed unless climate neutrality is achieved. In this sense, the objective of 1.5 degrees of the Paris Agreement requires that emissions be reduced by nearly 50% in the next 10 years.

Newborns are especially vulnerable to high temperatures, as they have a limited ability to thermoregulate – in other words, to control your body temperature – and it is easier for your temperature to rise or fall dangerously. Older infants and young children may thermoregulate better, even though they sometimes do not communicate their temperature discomfort and rely on caregivers to choose appropriate clothing and change their environment by opening a window or looking shade.

Estimates of heat-related deaths in African children are limited, mainly due to the lack of available information on mortality on the continent

Africa has some of the poorest and hottest countries in the world, which means that the continent’s children face risks from the effects of heat stress. However, estimates of heat-related deaths in African children are limited, mainly due to the lack of available information on mortality on the continent. In reality, the impact of climate change on heat-related infant mortality has hardly been investigated in other parts of the world.

To bridge this knowledge gap, we have estimated current and future heat-related mortality from climate change in African children under five years of age. To do so, we used a range of different global warming scenarios and information from a few existing studies linking temperatures to heat-related child deaths in Africa. Similarly, we examine population growth and recent declines in total infant mortality rates in African countries due to development improvements, such as better health systems and infrastructure.

We estimate that between 2011 and 2020, there were 12,000 to 19,000 heat-related child deaths each year in Africa. Of these, approximately half can be attributed to climate change. The additional deaths from this phenomenon offset a recent decline in heat-related deaths that had been achieved by improvements in development.

Our research underscores the urgent need to reduce emissions and adopt adaptation measures to reduce the impact of heat on infants and children.

The number of child deaths each year from heat is currently low compared to the number of deaths from diseases such as malaria, which is claimed each year with the deaths of approximately 400,000 African children of less than five years.

Future growth in heat-related deaths depends on future greenhouse gas emissions and subsequent global warming. Temperatures and heat-related deaths will continue to rise until the middle of this century, regardless of whether global infant mortality declines or a rapid reduction in emissions is achieved.

In a hypothetical future with no change and emissions continuing to rise, heat-related deaths in Africa could double by 2050. But about half could be avoided if we limit global warming accordingly. to the 1.5 degree Celsius target of the Paris Agreement.

Given a future with high greenhouse gas emissions and significant global warming, many parts of Africa will experience by 2100 a climate unparalleled by any current climate on Earth. Therefore, we cannot assume that current relationships between temperature and heat-related infant deaths will continue to apply in the future.

If emissions are reduced in line with the Paris Agreement, the number of days per year above the lethal heat threshold in Africa will only be slightly higher in 2100 compared to today.

Heat-related mortality depends on social and demographic factors, as well as climatic. Without climate change, heat deaths would likely decline over time thanks to ongoing improvements in the socioeconomic environment of African countries, such as more robust health systems.

We have preferred not to estimate heat deaths beyond the year 2050, as we believe that uncertainties about future population growth, socioeconomic development, and greenhouse gas emissions are too great for accurate estimates.

However, looking only at temperature rises, if emissions are reduced in line with the Paris Agreement, the number of days per year above the lethal heat threshold in Africa will only be slightly higher in 2100 compared to the present. However, if the Paris Agreement is not fulfilled, in 2100 the lethality threshold could be exceeded at a rate of 200 to 300 days each year.

Our calculations do not take into account future adaptation to rising temperatures. With sufficient resources, such as the use of air conditioners and changes in care practices, it will be possible to adapt to future temperature extremes. However, since younger children, particularly infants, do not thermoregulate, they cannot acclimatize psychologically in the same way as adults.

Our research shows that climate change is already negatively affecting the health of children in Africa. Something similar may be happening in other developing countries in the tropics and subtropics.

Nowadays, no country It is on track to reduce emissions to comply with the Paris Agreement and keep global warming below 1.5 degrees Celsius. If no urgent action is taken, the upper limits of human survival -as the wet bulb temperature 35 degrees – may be reached frequently in the tropics by 2100, with disastrous consequences for the populations of Africa and other regions.

This article was published in The Conversation and translated with the collaboration of Casa Africa. Translation: Eduard Galán Sanjuán.