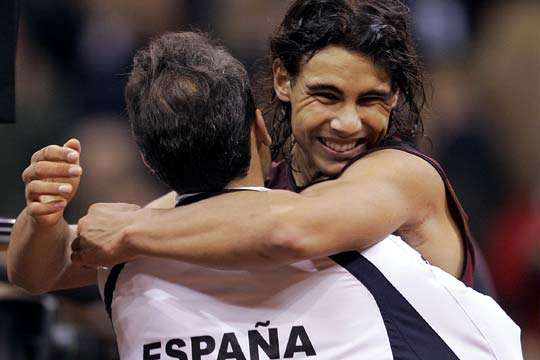 As far away as it seems, 2005 is still just as present in the world of tennis. Nadal has confirmed it with his victory at Roland Garros. Since 2005 he has played 14 finals and has won them all. His statistics, his evolution as a player and the margin of time that presides over his track record are impressive, as well as his extreme ability to overcome his injuries. The direction that tennis has taken in this 20-year period, characterized by the overwhelming hegemony of European players and the disappearance of Americans and Australians, is no less impressive.

With 22 Grand Slam titles (Australia, France, France, Wimbledon and the United States), Nadal leads the historical ranking. He precedes Swiss Roger Federer and Serbian Novak Djokovic, winners of 20 tournaments each. In 2003, a young Federer won at Wimbledon. No one suspected the coming revolution. That year, André Agassi won in Australia and Andy Roddick, in the United States. Since then, the record of the Americans is blank.

Roddick, a typical serve-and-hit tennis player, is antediluvian from today’s perspective, but his model is still prevalent among American players, unwieldy and less and less influential on hard courts, their favorite territory in the last century. They are not, nor are they expected, a very rare drift in one of the most mediatic and professionalized sports, ideal territory for North Americans.

Sergi Bruguera (1992, 1993), Carlos Moyá (1998), Albert Costa (2002) and Juan Carlos Ferrero (2003) had won in Paris and it was written that success would come to Nadal sooner rather than later. Actually, it took less than a breath. At the age of 18, he destroyed Roddick in the 2004 Davis Cup final and seven months later he was proclaimed champion of Roland Garros. Far from sheltering on the dirt tracks, Nadal decided to broaden his focus and turn it into a panoramic one.

He first explored Wimbledon. Then the United States and Australia. In 2009 he already recorded success in all four Grand Slam tournaments. Federer and Djokovic moved in similar margins. Although they felt more or less comfortable on some of the surfaces, all three have worked in all conditions. To his victory at Wimbledon 2003, Federer added the titles of Australia, Wimbledon and the United States the following year. He anticipated a tennis player of the time. And he has been.

Federer’s dominance was predicted, but the earthquake that was coming was not sensed. A world and his time evaporated. The United States had produced tennis stars decade after decade, as had Australia. By tradition, their players preferred fast surfaces, but did not reject slower courts. Between 1989 and 1999, the Americans Michael Chang, Jim Courier -on two occasions- and André Agassi triumphed at Roland Garros.

More than a decline of the two great tennis powers, there was an implosion. Suddenly, the United States and Australia had to assume a role very similar to that of Europe in athletics: organizing, sponsoring, recognizing their passion for tennis and accepting their inability to produce top tennis players. No American or Australian has reached a single one of the 73 Grand Slam finals since 2004.

It is true that in these 20 years an incomparable trinity of champions has come together. Federer, Nadal and Djokovic have won 62 of the last 73 Grand Slams. Except for the Argentinians Gastón Gaudio (2004, Roland Garros) and Juan Martín del Potro (US Open, 2009), the rest of the winners have been Europeans, constant without any aspect of dissipating. On the horizon appear the Spaniard Carlos Alcaraz, the Danish Olger Rune and the Italian Jannik Sinner. As for the Americans, we still have no news.