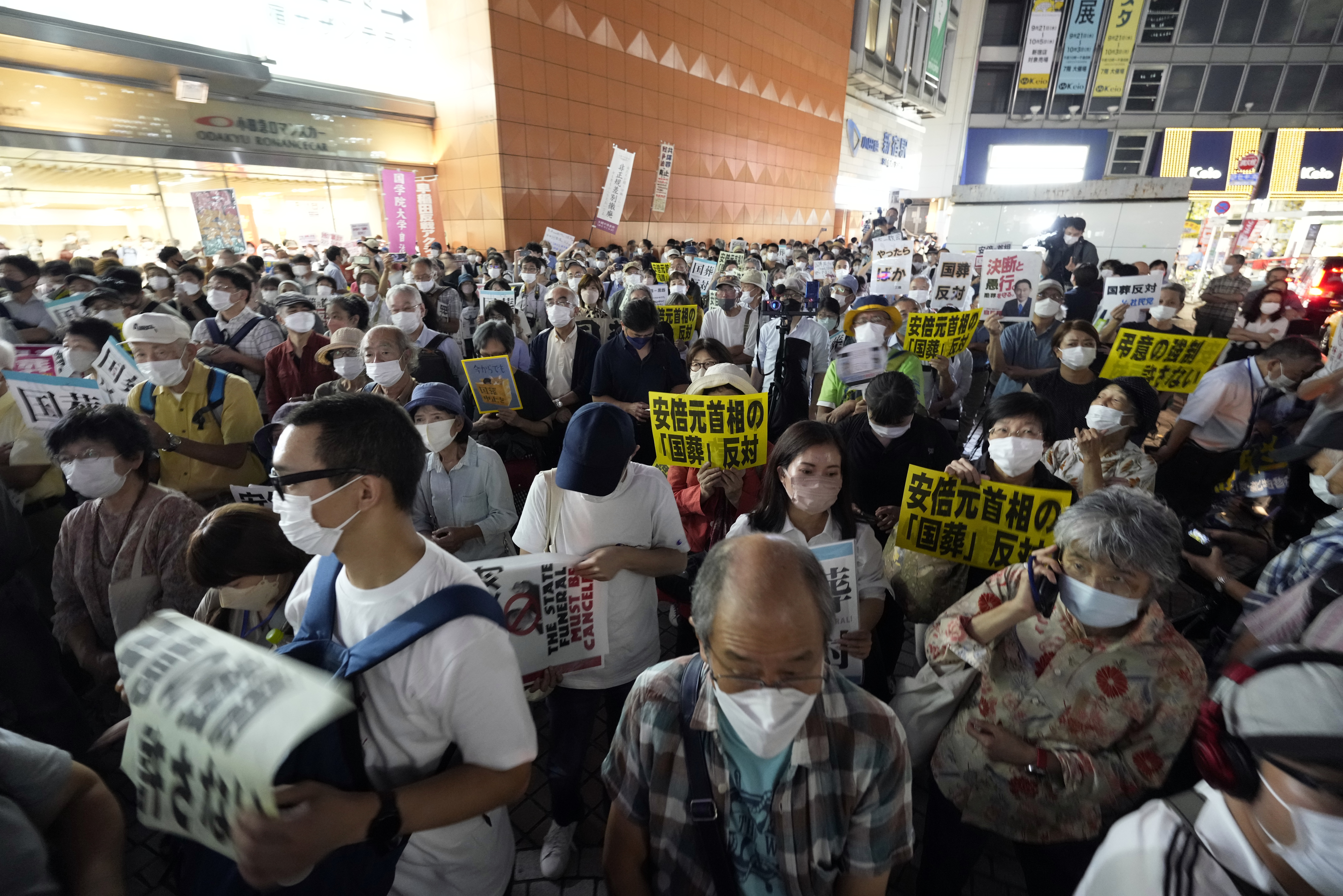 The state funeral for the death of Shinzo Abe, the former Japanese prime minister shot to death on July 8 while giving a street rally, has become a political problem for the government of the current prime minister, Fumio Kishida. The ceremony takes place on Tuesday amid tight security at the Nippon Budokan stadium in Tokyo. More than 4,000 people are expected to attend, including some 700 representatives from around the globe, including the US Vice President, Kamala Harris, and the President of the European Council, Charles Michel, while protests continue in the Japanese streets in his against.

The event was announced just six days after the assassination of Japan’s longest-serving prime minister in decades, with the country still reeling from trauma, and raised dust from the start. Criticized for his political opportunism and for his high cost -about 12 million euros- in times of a very affected economy, doubts have grown throughout the summer, as details about the ties between the Liberal Party Democratic (PLD), in which Abe was a member and to which Kishida belongs, and the Unification Church. These links were what allegedly motivated the murderer, Tetsuya Yamagami: he wanted to kill Abe for his support of this sect that ruined his mother, according to the confession released by the authorities after the murder.

Thousands of people have participated in recent months in demonstrations against the funeral of one of the country’s most charismatic leaders. This Monday, a new call has taken place in Tokyo. And in this magma of rejection, other factors are intermingled, such as the seventh wave of coronavirus infections and the argument of some legal experts, who question the legitimacy of the event. In repeated protests held in Tokyo parks and in front of government offices, participants have denounced the tribute to a politician who divided the country with his rearmament policy and his efforts to amend the pacifist clause of the Constitution, in addition to the scandals that tarnished his last government term in 2020 and remained unresolved.

On September 21, a septuagenarian tried to immolate himself in the neighborhood of the ministries in Tokyo as a protest and the former mayor of Hiroshima Tadatoshi Akiba published a message in which he warned foreign dignitaries that participating in the funeral was “covering up the misdeeds” of a politician who, in order to clarify the illicit expenses of an event, made false statements in parliament 118 times.

Meanwhile, the bomber, a 41-year-old former Japanese Navy member, reduced moments after firing a homemade pistol at Abe, remains under psychiatric evaluation. No developments in the case are expected until November, Nara prefectural police said by phone. According to Yamagami’s first statements released by the authorities after his arrest, the Japanese media see his grievance against Abe for supporting the Unification Church as a motive for the crime.

This Christian and anti-communist group of Korean origin, also known as Reverend Moon’s sect, has raised much of its millionaire worldwide income from Japanese parishioners such as Yamagami’s mother who, by donating insurance money collected after the suicide of her husband and the cattle from the sale of family properties ruined the future for their children.

A ‘marriage’ of convenience

It is unlikely that Yamagami calculated that his crime would reveal the deep contradictions in the relationship between the former prime minister and the sect. Known for his nationalist rhetoric and his historical revisionism, Abe considered that Japan had received an unfair verdict from history and denied the most dire episodes that occurred during its military actions in the first part of the 20th century.

During his first term (2006-2007), the influential politician denied the forced recruitment of Korean and Chinese women for the brothels of the Japanese imperial army that occurred during the Japanese colonization of the Korean peninsula (1910-1945). The strong protests in South Korea forced him to recant and in 2015, in the midst of his third government and on the occasion of the 70th anniversary of the end of World War II, he apologized through diplomatic channels and agreed to compensation for the survivors of that country.

For the Unification Church, official Japanese compensation for the damage inflicted during its colonization was not enough, and that is why its Japanese followers pay much higher fees than parishioners of other nationalities, explains Koichi Nakano, professor of Political Science at the Sofia University, Tokyo. “It is ironic that just because of its anti-communist background, the sect has forged such close ties with the far right wing of the PLD. Such a level of hypocrisy leaves many of us stunned,” says the academic. He adds that this marriage of convenience is governed by the sentence “the enemies of my enemies are my friends.”

Nakano also recalls that Abe’s maternal grandfather, Nobusuke Kishi, prime minister between 1957 and 1960, saw in the founder of the sect, the self-proclaimed Korean messiah Sun Myung Moon, an ideal ally to root out any outbreak of communist sympathy. in Japan.

Despite repeated public denunciations of its aggressive fundraising and proselytizing methods, the Unification Church has always had the protection of the LDP. Thanks to the journalistic investigations following the murder of Abe, the general public has learned that many of the political proposals of this party, with regard to family values, the rejection of same-sex couples and the supposed need for granting absolute powers to the state in cases of emergency, coincide with those of a political group affiliated with the sect called the International Federation for Victory over Communism.

Yoshiyuki Inoue, one of the candidates supported by Abe in the last elections to the upper house, won his seat thanks to the support of the Unification Church. “Inoue fights against the forces of Satan” said a message that circulated among the members of the sect to ask for the vote for the politician. The newspaper Asahi published an investigation into the strategy designed to allow Inoue to double the number of his voters from the previous 2019 election.

Such revelations have affected Prime Minister Kishida’s popularity and forced him to purge his Cabinet. On August 10, he replaced eight of his 18 ministers who acknowledged having had some relationship with the sect, including Defense Minister Nobuo Kishi, Abe’s brother, who uses his mother’s surname. Although the LDP promised an internal investigation and earlier this month revealed that 179 of its 379 deputies have had ties to the Unification Church, a poll last week showed Kishida’s popularity had fallen to 29%, the lowest rate. low since he took office 11 months ago.

As the political shock wave progresses, legal experts are evaluating the possible punishment for its alleged perpetrator within a legal system that applies capital punishment. “Yamagami could be declared innocent if doctors find that he suffers from mental disorders,” says Hitomi Takemura, a law professor at Hitotsubashi University in Tokyo. If Yamagami is mentally healthy and the doctors authorize the criminal procedure, the trial will take place with six lay citizens chosen by lot. Professor Takemura considers capital punishment “very unlikely”, given that the number of fatalities is usually greater than one when it has been issued.

Since the attack, stories have been released of people who suffered deprivation because their parents gave the Unification Church the money for their support and education, and Yamagami has begun to be seen as a vulnerable person and victimized by the sect. . Some 8,000 people have signed an online petition to reduce his sentence and, according to the local news agency Jiji PressUntil the first week of September, Yamagami had received more than one million yen (about 7,000 euros).