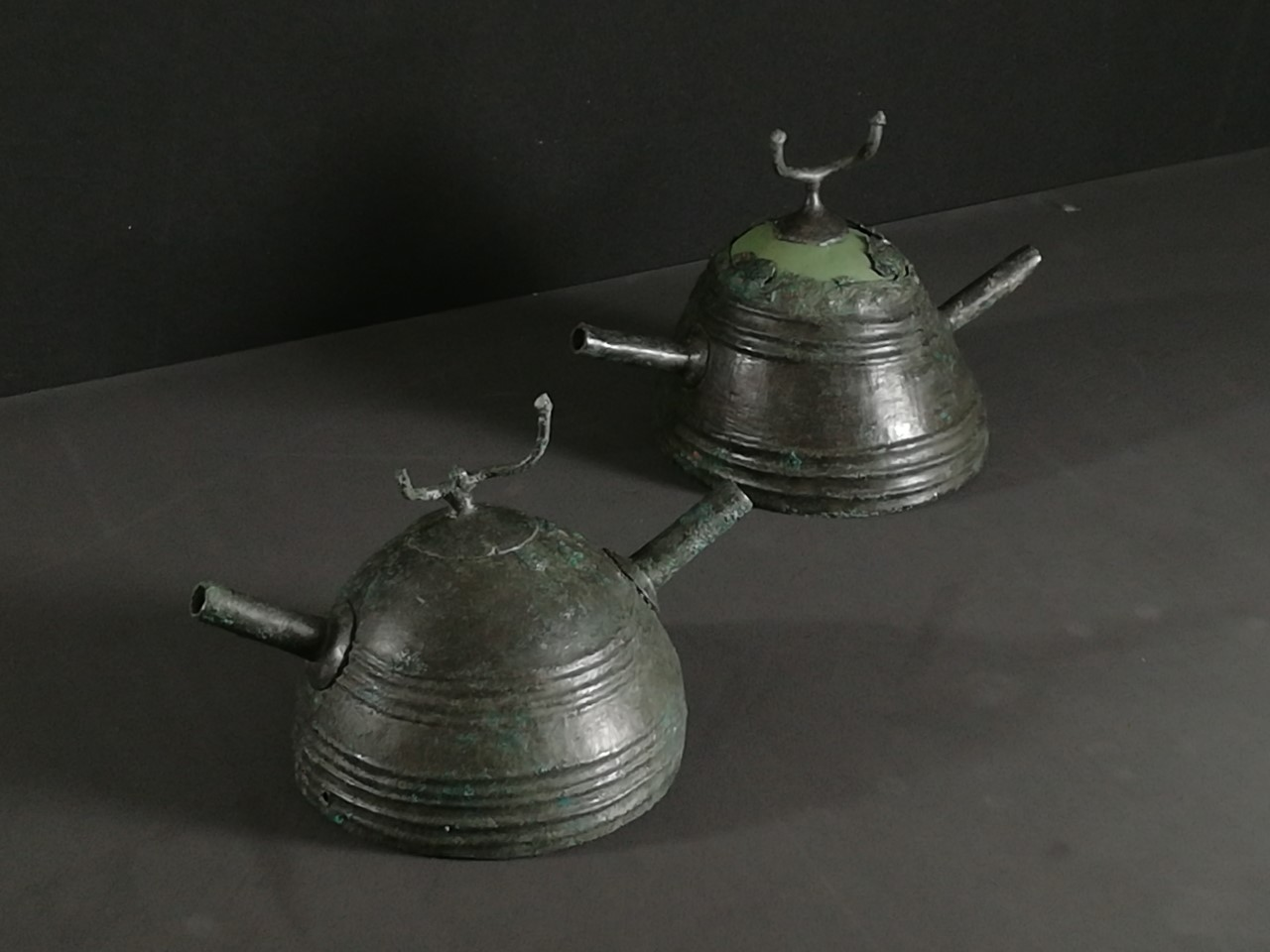 On December 25, 2020, the phone rang in the Archaeological Museum of Asturias. An anonymous informant announced that in a cave in Picu Las Torres (Cueves, Ribadesella), a green promontory next to the Sella River, had found some metallic objects that, he believed, were worth analyzing. Two days later, a team from the Grupu Espeleolóxicu Gorfolí, under the supervision of the museum, carried out an urgent inspection. In the first meters of the hole, he found “two unique metal hulls in Europe”, according to a report from the Principality of Asturias, along with ceramic and bone materials. Two years later, and after having restored the pieces, the specialists ―more than thirty experts from various Spanish universities have participated, CSIC and laboratories― conclude that these are two “hemispherical caps made of bronze plate with double symmetrical fit for plumes or antlers and crest of appendages finished in buttons, appliques all of them cast in leaded bronze and fixed by rivets”. They were made about 2,500 years ago, around the 7th century BC. C., “so it can be concluded that we are facing two unique pieces in the repertoire of European prehistoric weaponry”. Since last May 19 they have been exhibited restored in the Archaeological Museum of Asturias.

Experts remember that the seventh century a. C., a moment of transition between the Bronze and Iron Ages, was “a historical period characterized by the appearance of the first forts [asentamientos fortificados] of Asturias”. “The tubular appendages of the helmets for the insertion of antlers”, they continue, “recall the image of the headdressed warriors in the Late Bronze stelae of the Southwest and other representations of similar or greater antiquity in the eastern Mediterranean, from Egypt to Sardinia. Its crest with curved appendages resembles the elements that characterize the antenna daggers [dagas con doble prolongación en el mango] Asturians”.

The recovery of the helmets includes six different projects commissioned by the Ministry of Culture, Language Policy and Tourism of the Principality of Asturias to different entities and research groups. Among them, the historical study of the moment in which they were made, coordinated by the archaeologist Angel Villa, the Emeritus Professor of Prehistory at the University of Oviedo Michelangelo de Blas Cortinas and the specialist in ancient weaponry and professor Fernando Quesada Sanz. It establishes the “relationship and specificity of the pieces recovered in Ribadesella in relation to the helmets used during prehistory in other regions of Europe, tracing possible affinities, formal and symbolic, from the Middle East to the Atlantic regions”.

The prehistoric moriones were also transferred to the Electron Microscopy and Microanalysis Laboratory of the Institute of History of the Higher Council for Scientific Research, where an exhaustive analysis of the materials with which they were manufactured was carried out. X-ray fluorescence, microtopographic, energy spectroscopy and isotope analysis techniques were applied. Technicians from the Archeometallurgy Project of the National Archaeological Museum participated in the investigation.

The helmets were later restored at the Archaeological Museum of Asturias, after manual cleaning without applying chemical agents. Then, the pieces of the most deteriorated cap were glued with resin and adhered to a stable support to thus recover the original appearance of the pieces to be exhibited.

In addition, the ceramics found next to them, which correspond to containers, have been analyzed by the Archaeometry Laboratory of the Department of Prehistory and Archeology of the University of Granada. They have been studied with techniques such as lipid characterization, X-rays, electron microscopy, and gas and liquid chromatography. The bone remains, for their part, are currently being studied at the Faculty of Biological Sciences of the University of Oviedo and at the University of Santiago de Compostela.

Although the results of the archaeological intervention and the chemical analyzes are not finished, the specialists advance that everything “points to a ritual deposit that, in principle, does not seem to be related to funerary practices, but rather that the grotto had a ceremonial use that dates back to prehistoric times”. “It is a discovery, without a doubt, spectacular”, affirm sources from the Oviedo museum. “But we will still have to wait for the studies to finish, since they can offer many more surprises. The helmets are in the best hands”.

Previous article
Núria Marín’s ‘wasaps’ reveal her “unconditional support” for those investigated for corruption in L’Hospitalet | Catalonia | The USA Print
Next article
Ledicia Costas: “My formula is to write eight or 10 hours a day, if anyone has another, let me know!” | Culture | The USA Print