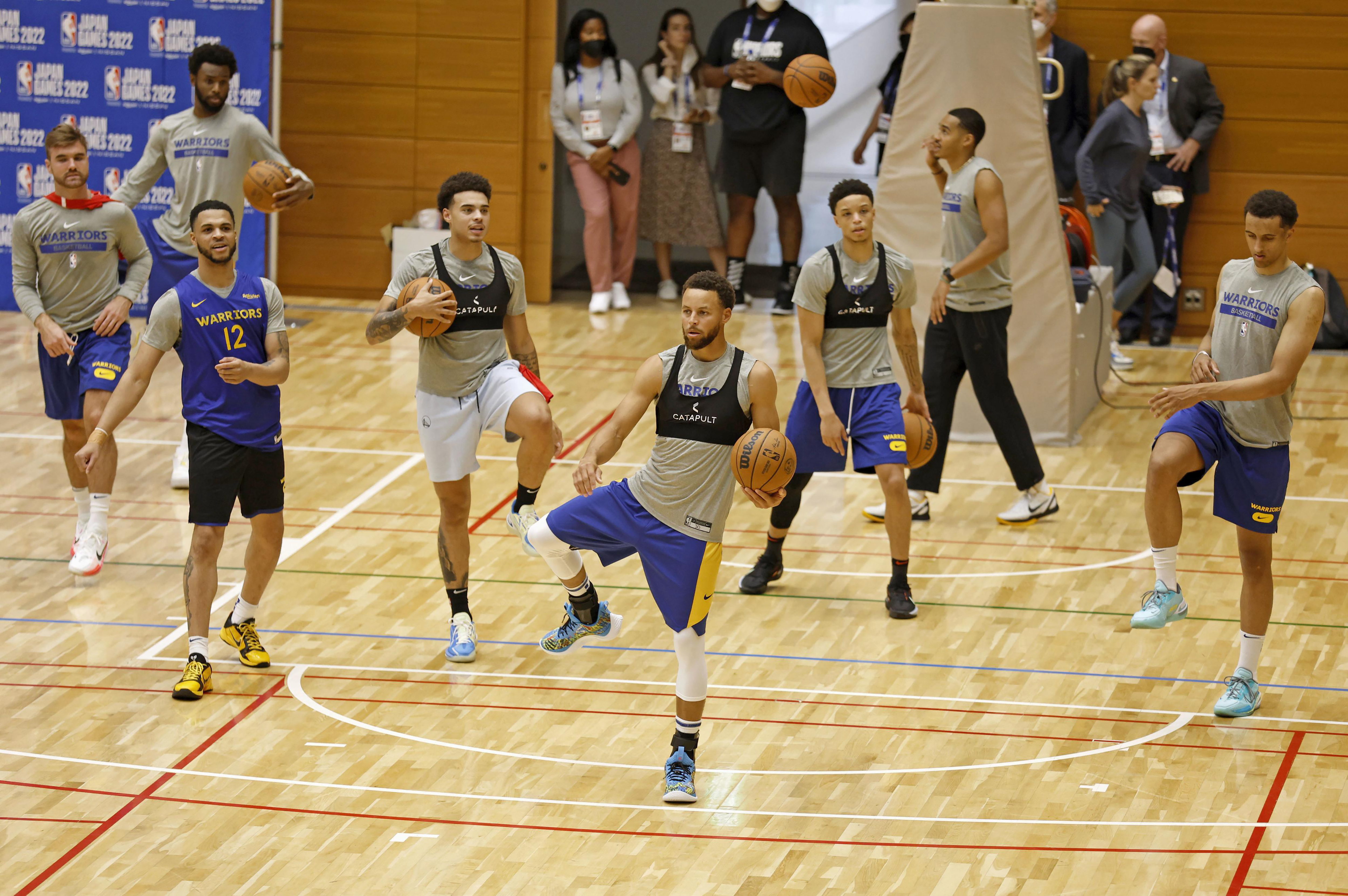 The NBA ball starts bouncing tomorrow Friday in Tokyo. The American professional basketball league continues to win over audiences around the world and has scheduled two games in Japan and another two in Abu Dhabi for preseason. The official competition begins on October 18 with two games featuring the 2022 champion and runner-up, the Golden State Warriors and the Boston Celtics. In the new season, Stephen Curry will try to prolong the reign of the most dominant team of the last decade. The other favorite is a more mature Boston Celtics who, however, have been left without the coach who took them to the final, Ime Udoka, suspended for a year for her relationship with an employee.

The Golden State Warriors will face the Washington Wizards this Friday (12:00 pm #Vamos) and this Sunday (7:00 pm) in Saitama (just outside the Japanese capital). The preseason will last until October 14, with 65 games in 15 consecutive days and then start the league with two classics: the Celtics against the Philadelphia 76ers and the Warriors against the Los Angeles Lakers.

Along with the Warriors and Celtics, the Los Angeles Clippers are high on the odds, taking for granted a triumphant return by Kawhi Leonard. The Phoenix Suns and the Milwaukee Bucks, 2021 finalists, also present their candidacy. And the 76ers and the Brooklyn Nets, among others, aspire to surprise.

Curry’s baton. The champions have in Stephen Curry both a conductor and their best soloist. His 3-point and game-control recital in this year’s Finals make the Warriors worth reckoning with, though the question is whether Curry will be able to extend his heyday into a season in which he turns 35. The Golden State Warriors have been to six of the last eight NBA Finals and have won four of them. Along with Curry, Klay Thompson (who was absent in the two years the team was out of the final) and Draymond Green form a fearsome triumphant trio, always with Steve Kerr on the bench.

The maturity of the Celtics. Those from Boston were the most resounding surprise of last season. The team that, together with the Lakers, has the most NBA titles (17) had not played in a final since 2010. After a good regular season, it grew in the playoffs and left out Milwaukee and Miami on its way to a final in which He went 2-1 ahead, but fell apart at the moment of truth. With the lesson learned, with Jayson Tatum as a great star, escorted by Jaylen Brown and Gary Payton as the best defensive player, and with the signing of Malcolm Brogdon (which can be key if injuries respect him) they seemed ready to take their revenge . However, the club has suspended its coach, Ime Udoka, for a year for a consensual romantic relationship with an employee that violated club policy. She is replaced by Joe Mazzulla on an interim basis and that replacement has caused doubts and confusion in the team.

Western Alternatives. The Los Angeles Clippers stayed out of the playoffs last year, and yet they sound like candidates to face the Warriors. Much of his chances will depend on whether Kawhi Leonard goes back to being himself after his knee ligament injury. Leonard was a champion with the San Antonio Spurs in 2014 and with the Toronto Raptors in 2019, both times being the best player in the final, but he spent last season in white just after a multimillion-dollar renewal. Also, he hopes to have his other star, Paul George, who also missed much of last season. The block that last year saved the guy plus the signing of point guard John Wall complete the candidacy.

The Phoenix Suns were the first of the last year in the regular season, but fell in the seventh game of the semifinals of the Western Conference against Luka Doncic’s Dallas Mavericks. They have been in the news for the one-year suspension of their owner for harassment, sexism and racism and the club is for sale. They have been about to let one of their key players, Deandre Ayton, escape, but in the end they keep the solid and reliable block led by Devin Booker who will go to the playoffs for sure and there he will see where he is. Also in the West, the Dallas Mavericks seem too dependent on Luka Doncic and even the best version of him is not guaranteed to advance much in the playoffs. The Los Angeles Lakers have revamped their team a lot, but after last season’s catastrophe, not even LeBron James seems to have the energy to make them a candidate anymore. They’re not even guaranteed to make the playoffs.

Eastern Alternatives. The Celtics are clear favorites in the East, but Giannis Antetokounmpo’s Milwaukee Bucks are hoping to get revenge for their elimination against them in Game 7 of the Eastern Conference semifinals. The 2021 champion Bucks were hampered last season by a series of injuries, but if they are in good form they are still a team to consider to win in the East and go to the NBA finals. His main signing of the summer is veteran Joe Ingles, a good shooter who reinforces his outside line.

The Philadelphia 76ers also want to recapture their lost greatness, and they have the cards to do so. Joel Embiid was considered the second best player in the regular season the last two years and James Harden was the best in 2018, while Tyrese Maxey is a rising star. If they manage to retain Tobias Harris and the new signings contribute, the Sixers can cause an upset. In the East, we must not forget the Miami Heat, who were the best last year in the regular season. The Cleveland Cavaliers, who with Donovan Mitchell have starred in the signing of the summer in the NBA, to which are added Darius Garland, Jarrett Allen and Evan Mobley, but seem a step below. The same goes for the Brooklyn Nets of Kevin Durant, Kyrie Irving and Ben Simmons. They could go far performing at their best, but it is more than doubtful that they will.

The legend Lebron James. The Lakers don’t have too many aspirations this year, but their star LeBron James, who turns 38 on December 30, has a legendary challenge. It is in his hands to become the all-time leading scorer in the NBA this season, surpassing the 38,387 points of the legendary Kareem Abdul-Jabbar, which has been maintained since 1989. He is separated by 1,325 points from achieving it and last year he achieved 1,695 without his team losing qualify for the playoffs.

Newbie exam. The performance of the new players will be another of the points of attention of the season. As usual by the selection system, the first chosen in the Draft have ended up in teams at the bottom of the table and it will be necessary to check what the Italian-American Paolo Banchero, number one, chosen by Orlando Magic, is capable of contributing; Chet Holgrem, selected second by the Oklahoma City Thunder, and Jabari Smith, a relegated third-place favorite selected by the Houston Rockets.

Substitute Spaniards. When Fernando Martín was signed by the Portland Trail Blazers in 1986, it was a milestone, despite the subordinate role he played. This year there will be six Spaniards in the NBA, but after the time of the Gasol brothers, everything knows little. Santiago Aldama (Memphis Grizzlies), Usman Garuba (Houston Rockets), Juancho Hernangómez (Toronto Raptors), Willy Hernangómez (New Orleans Pelicans), Serge Ibaka (Milwaukee Bucks) and Ricky Rubio (Cleveland Cavaliers) seem doomed to substitution, despite that only Ibaka plays on a team with real aspirations. Rubio, Ibaka and Willy Hernangómez are the ones who in principle will have more minutes, but the great Eurobasket of Garuba and Juancho Hernangómez and the good summer league of Aldama increase their options.