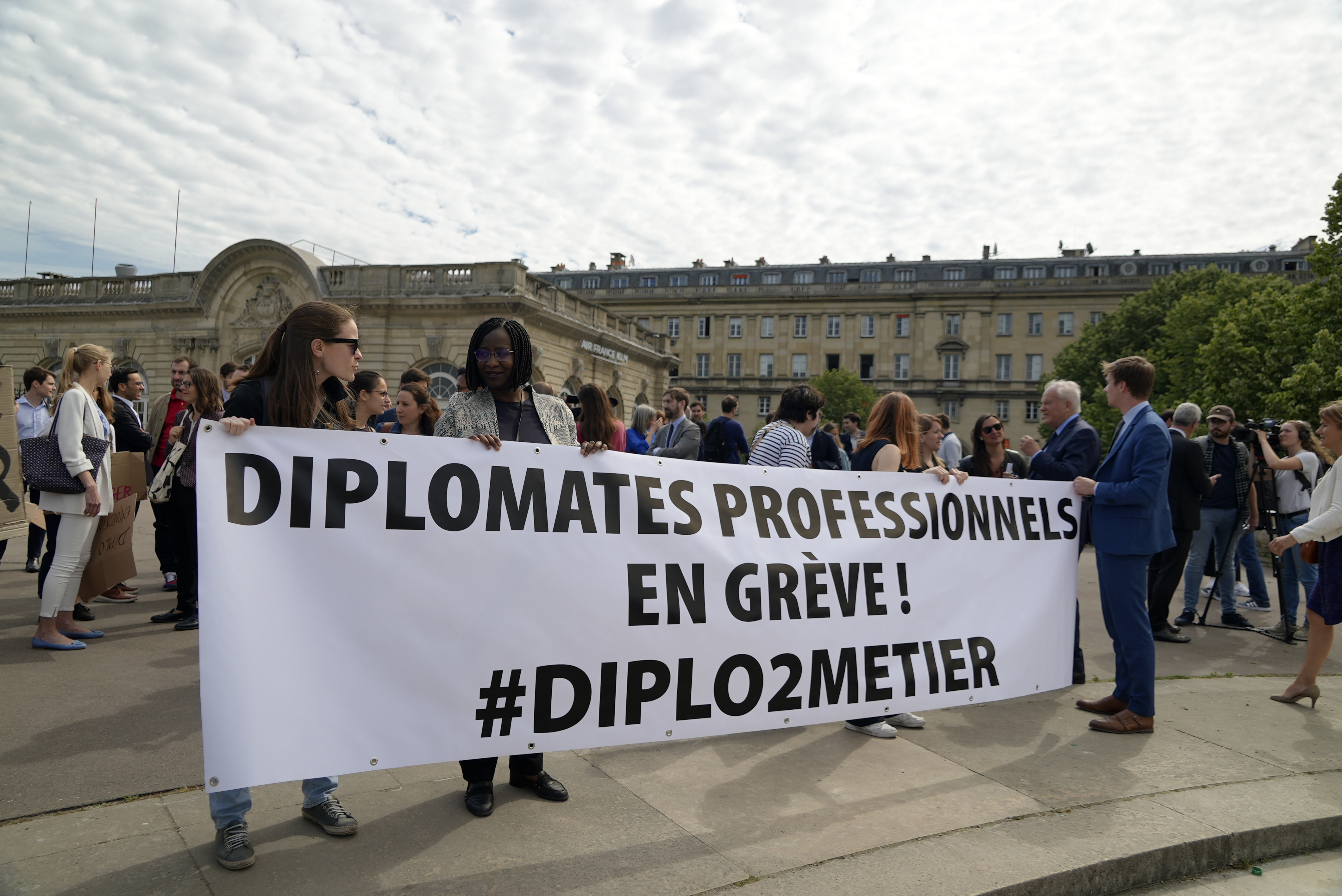 French diplomats went on strike this Thursday for the second time in history. The reason is the decision of President Emmanuel Macron to abolish the body of plenipotentiary ministers and foreign affairs advisers: the diplomatic elite. Macron intends to open diplomacy to senior officials and specialists from other fields. Diplomats denounce that the reform threatens the global influence of France, a nuclear power with a permanent seat in the UN Security Council and the third network of international missions after the United States and China.

“The reform will destroy the diplomatic profession, a complicated and demanding profession,” said veteran diplomat Jean Mendelson, who, among other positions, was ambassador to Cuba. Mendelson was demonstrating with a few hundred colleagues — young diplomats and retirees, like him — outside the Quai d’Orsay, the historic headquarters of the Foreign Office in Paris. “The reform will terribly weaken France’s ability to pull its weight,” he added.

France is a country accustomed to strikes and demonstrations, also by public officials. It is unusual, however, that those who protest are those who occupy the highest echelons of the Administration. The previous strike was in 2003 against financial and personnel cuts. Diplomats now supporting the mobilization include ambassadors and regional directors at the ministry. Jean-Yves Le Drian, Macron’s foreign minister since 2017 and until a few days ago, was opposed to the reform. His successor in the new government appointed after the presidential elections in April is a career diplomat: Catherine Colonna.

Refound the dome of the Administration

The reform of the Quai d’Orsay, published in a decree between the two presidential rounds, is one more piece in a broader plan of transformation of the high State Administration. The first step was the abolition of the National School of Administration (ENA), the nursery of the French ruling class, and its replacement by an establishment called the Public Service Institute. The second, the end of the so-called prefectural body, made up of the prefects. In Spain the equivalent of the prefects are the delegates of the Government. But in a centralist country like France, the prefects enjoy considerable power and, to access the position, a specific training and professional career is required, such as that of an ambassador.

With the progressive merger, starting in 2023, of the bodies of plenipotentiary ministers and advisers for foreign affairs in the new body of State administrators, Macron takes a further step in his desire to refound the leadership of the Administration. He connects with one of his obsessions since he was Economy Minister almost a decade ago: to shake up “the corporatism” of politics and society. The idea is not to end the functions of ambassador or prefect, but to encourage mobility. In other words, a prefect can end up being a diplomat, and vice versa. And that a diplomat can hold a position in the Ministry of Ecology, and vice versa.

“Our goal is that skills can circulate outside the silos that enclose each other,” he said at the end of 2021, in statements to the newspaper L’opinion, the then Minister of Public Administration, Amélie de Montchalin. The argument is that in France, where the weight of the central State is greater than in other surrounding democracies, the Administration is not prepared for the 21st century, and inertia and pressure groups prevent a flexible response to challenges. The high state bodies, according to Montchalin, act as “a padlock” to maintain the system.

Macron’s tensions with the Quai d’Orsay are not new. It is not only due to his tendency to hoard power, which in the case of European and foreign policy – his favorite subject – is evident. There have been notorious episodes, such as the speech before the ambassadors in 2019. The president made those present uncomfortable by denouncing, in the terms of former US President Donald Trump, the existence of a “deep state” within the Foreign Ministry. This deep state, according to his theory, would be torpedoing the thaw that the president was attempting at that time with Vladimir Putin’s Russia. Time and the war in the Ukraine have proven right those who, at the Quai d’Orsay, were skeptical of that approach.

Also Read  Wretched are the moderates | The USA Print

Thursday’s strike can be understood as another episode in the struggle between political and administrative power. In a column published in Le Monde May 25, 500 employees of the Quai d’Orsay warned of the risk that, with what they describe as “brutal suppression of the diplomatic corps”, it will be easier in the future for political leaders to resort to “appointments of complacency”. In other words, appoint as ambassadors or consuls friends or allies from politics or business and without diplomatic experience, as is the case in the United States.

“Diplomacy is not a job that is improvised: they are skills acquired over the years in Paris, in embassies, in permanent representations,” explained one of the 500 signatories, a 36-year-old diplomat named Benjamin, during Thursday’s demonstration. . “The reform is not dangerous for us personally,” he added, “but for France, its international politics and its place in the world.” The diplomat, who preferred not to give his last name, was wearing a suit and tie, and a loudspeaker in hand to launch slogans.