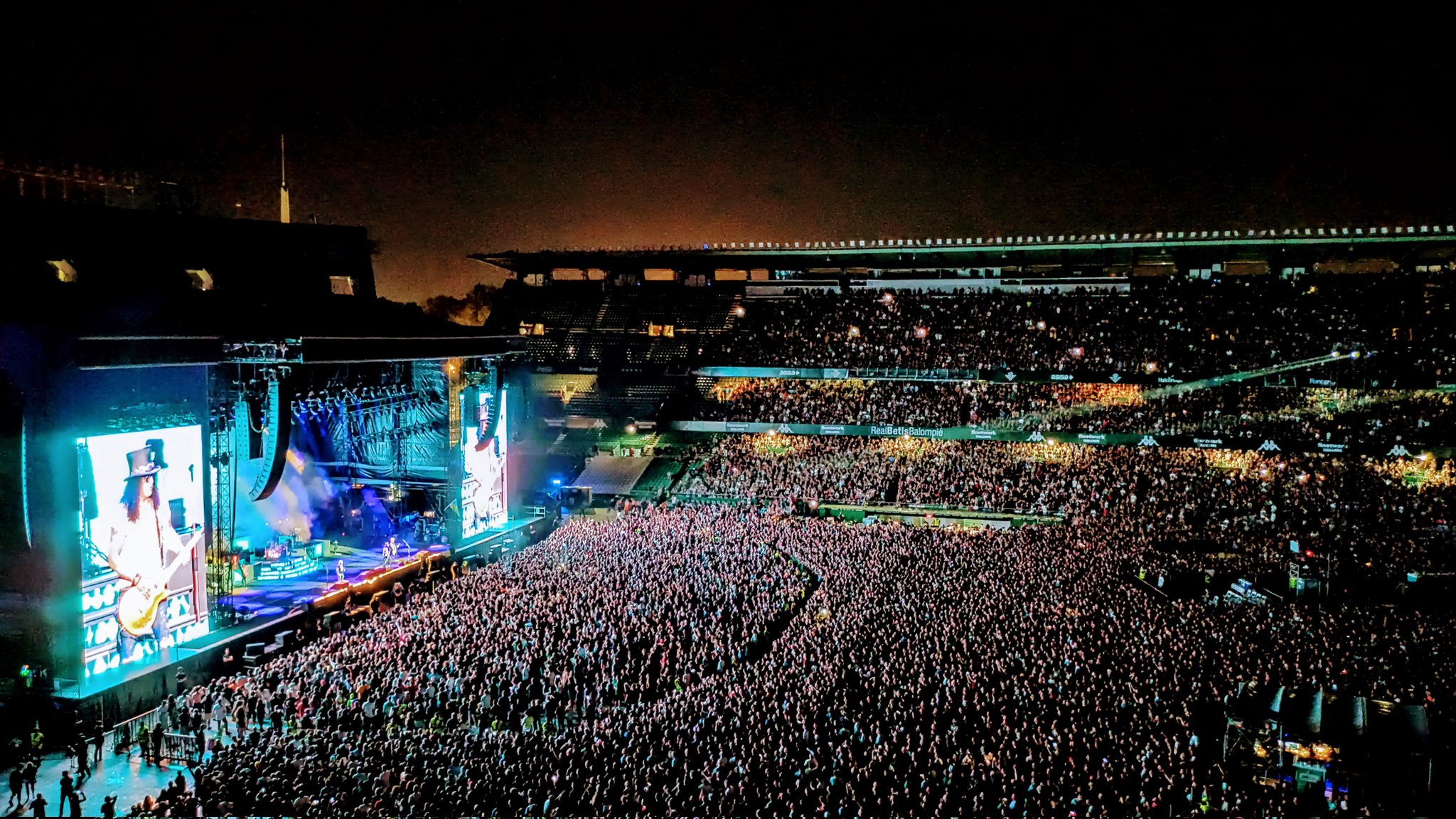 The third time was the charm. After the postponements of 2020 and 2021 caused by the pandemic, Guns N’ Roses finally performed in Seville this Tuesday as the only date in Spain of the 15 that will make up their European tour this year. They did not sell all the tickets for the Benito Villamarín stadium, whose general prices ranged between 50 and 180 euros, but, even so, the attendance was important: 43,000 people who did not want to miss their date with some rock legends who, for many years, it was considered lost forever, and that they were resurrected when no one expected it.

Specifically, it was in 2016 when it was announced that founding members Slash (guitar) and Duff McKagan (bass) were returning to the band after two decades in which Guns N’ Roses had been the project/whim of vocalist Axl Rose. Jokingly, their reunion tour was called Not In This Lifetime Tour, a title that ironized some old statements by the leader assuring that he and Slash would never be together again on stage in this life. The thing went so well that it became the second most lucrative tour of all time ―only surpassed by the 360º Tours by U2―despite not having released any new material since the ill-fated album Chinese Democracy, of 2008. And in those they have continued, prolonging it as a kind of tour that has reconciled them with their public and with themselves.

Part of that acceptance, without a doubt, has come from assuming that all the charm of Guns N’ Roses lies in the mythology and the songbook that they developed between 1987 and 1991. Practically the entire repertoire of the concert was based on the records that they published in those years: Appetite For Destruction ―of which they performed eight of its twelve songs―, lies and the two volumes of Use Your Illusion. Exactly the same ones that the band brought under their arms on their previous visit to Seville, the same venue, in the summer of Expo 92. We cannot know how many spectators repeated with respect to thirty years ago, but the intention of the concert was to make us believe that , if we didn’t pay too much attention to the bodies and faces of the protagonists, the songs could take us to travel back to that time. Pure nostalgia, a museum of the natural history of rock that only showed current echoes with delirious visuals horterez digital and several references to the war in Ukraine: a flag of that country waving in the interpretation of Civil War, two others flanking the stage and another one, next to the drawing of a raised fist, on one of the shirts worn by Axl Rose.

“From parents to children, from grandparents to grandchildren, a passion called Betis”, could be read in one of the stadium’s stands. And, though the teal and white colors were traded that Tuesday night for the black Guns N’ Roses logo T-shirt – and even for a few fans dressed up chanant as the group’s vocalist and guitarist-, that intergenerational legacy of the Californian band was appreciated. Maybe there were not so many grandparents, but it was endearing to see many parents with their children, something that probably nobody would have imagined in the late eighties, when Axl, Slash and company bragged about their self-destructive and unpredictable drive. Now they have exchanged danger for professionalism, defying the passage of time with an extensive concert of almost three hours and showing all their physical, instrumental and vocal skills on stage. It was a pleasure and envy to see their movements and careers on stage, showing off, enjoying themselves, exhibiting their virtuosity.

Contrary to what happened three nights before at the Red Hot Chili Peppers performance, no one was disappointed by the chosen repertoire, in which almost none of the songs that the faithful wanted to hear were missing (if anything, Don’t Cry). Moments of maximum fervor were Welcome To The Jungle -fifth song of the concert that, magically, coincided with nightfall-, a Sweet Child O’Mine that caused hysteria when it started with Slash’s iconic plucking, and the pretentious as well as beautiful november rain, that the vocalist performed on a grand piano that several operators placed at the front of the stage just for that moment. The Guns alternated the generous interpretations of their greatest hits with other somewhat more hidden themes in their discography, or even surprises for fatal fans such as slither, by Velvet Revolver, the side group formed by Slash and McKagan with Scott Weiland of Stone Temple Pilots.

Also Read  Colombia Elections: The hour of the nobody and the counterweights | Presidential Elections Colombia | The USA Print

Actually, what could have remained a tribute act to themselves, was extended into a tribute to their rock heroes, punctuating the concert with half a dozen versions and some additional winks, such as the melody of black bird by The Beatles with which they introduced their ballad in acoustic Patience. In addition to the expectedLive And Let Dieby Paul McCartney, and Knockin’ On Heaven’s Doorby Bob Dylan), inflamed the audience with black is back from AC/DC, which Rose introduced ironically that he had had another job some time ago, in reference to the tour in which he officiated as a vocalist for the Australians, and which also passed through Seville. More unexpected were still I Wanna Be Your Dogby The Stooges ―sung by McKagan, who was always the most punk of the group― and, in the encores, the classic country Wichita Lineman composed by Jimmy Webb and popularized by Glen Campbell. That was a moment of unfathomable strangeness that anticipated the end of the party, closing the same plot circle with which, around 9:45 p.m., the ceremony had begun. If the band had started frantic with It’s So Easy Y Mr Brownstonetwo of the most macarras themes of Appetite For Destruction, said goodbye with another pair of dirty aces, you’re crazy Y Paradise City. It was as if Axl, already in his sixties, and the other two founders -who are on the same path- were looking at the skulls that occupied the cover of that album and saying: “See? We’re still here, and things haven’t gone too bad for us”.

Previous article
Russia is willing to unblock the exit of the grain if Ukraine agrees to demine the coast | International | The USA Print
Next article
Defense requests 3,000 million to strengthen NATO against Russia | Spain | The USA Print