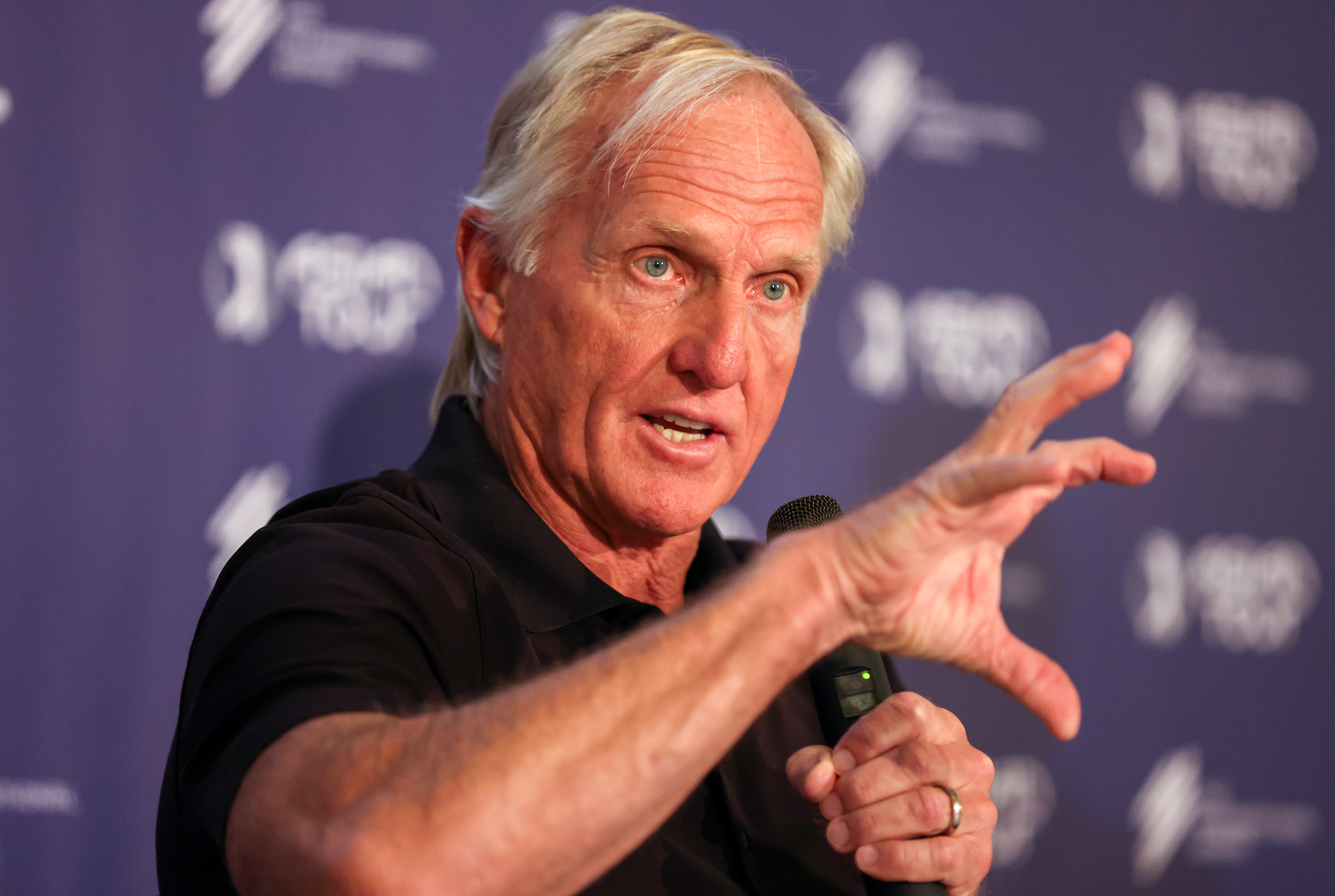 Two golfers enter the players’ dining room during a tournament and see the Australian Greg Norman, one of the great stars, sitting alone at a table while the rest of his teammates share a tablecloth.

— Why is Norman eating alone?

– You are not alone.

The parody portrays the man behind the great golf earthquake. Norman, 67, is the CEO and visible face of LIV Golf Investments, the company that, with financing from the sovereign wealth fund of Saudi Arabia, has created a parallel league to the American circuit whose first tournament is held from June 9 to 11 in London. . Among the rebels are figures such as Dustin Johnson, Sergio García and Phil Mickelson (the latter confirmed this Monday), attracted by the powerful magnet of petrodollars. The hunt has been taken over by The Great White Shark, a nickname Norman earned at the 1981 Masters for his sharp face and aggressive play. The nickname has accompanied him his entire life on and off the field, in the game and in business. The gambler Norman gave way to the even more voracious businessman Norman.

A day marks the sports career of Greg Norman. On April 14, 1996, the last day of the Augusta Masters, the Australian became the big loser forever. Leader after the first round with -9, also after the second and third, El Tiburón woke up on Sunday with a six-stroke advantage over Nick Faldo (-13 to -7). The green jacket was waiting for him on the hanger. But what happened was the biggest collapse (and comeback) in tournament history. Faldo signed -5 in the round. Norman, +6. By then the Australian already had two greats in his bag (the British Open in 1986 and 1993), but that defeat has never left him. El Tiburón wrote a record with 87 professional victories (20 on the American circuit on which he has now declared war) and many shots at the post in the big ones: 30 classifications among the top 10 between 1979 and 2008, eight times second, the only one together to Craig Woods who has played a playoff in all four majors. The last glimpse of him was another almost. He opened the last round of the 2008 British Open with a two-shot lead but sank at +7 and handed the glory to Padraig Harrington. He was the first major to play in three years.

That’s where the Norman player came. Golf hadn’t been his first love, but he had tried football and cricket before, and he didn’t stretch that marriage too far either. Turned 50, he closed the door to the Champions Tour, the circuit of veterans. Injuries were punishing him and he had other concerns. By then he was already the rich and famous Norman businessman, married for 15 months to former tennis player Chris Evert.

In the elite of golf, the Australian created Great White Shark Enterprises in 1993, a conglomerate of companies that he later baptized as the Greg Norman Company and that today expands its tentacles: the design of more than 100 golf courses around the world, a of clothing inherited from Reebok, 14 varieties of wine in Australia, California and Argentina, a real estate network, a loan fund, the production of wagyu beef steaks, water skiing amusement parks, golf goggles, buggies with a touch screen, a restaurant… as well as investments in many other portfolios and an agenda at the highest level —a friend of Bill Clinton, who in 1997, while he was president of the United States, fell down the stairs of the golfer’s house in Florida—. The Norman Empire.

Former player and businessman, with contacts in golf and in offices, it is not surprising that the Saudi Super League pointed him out after the refusal of Jack Nicklaus, the champion of 18 majors, to be an ambassador of the new circuit in exchange for 100 million dollars . Norman said “I do” and today he is the man who knocks on the door of the stars and opens a briefcase full of petrodollars to win them over to the rebel side. At the moment he has signed a few (Sergio García was a partner of his daughter, Morgan), and the checkbook seems unlimited. A few days ago, when asked by Sky Sports about the allegations of human rights violations in Saudi Arabia, Norman replied: “They are not my bosses. We are independent, I do not answer to Saudi Arabia.” His is the business.

What about the big four?

“They will not stop us”, warns Greg Norman about the expansion plans of the Saudi circuit. The idea is to stretch the calendar from eight to 10 tournaments next year and 14 the next. The tension is maximum with the PGA Tour, which threatens to expel dissidents from their competitions. However, it is not in their power to prohibit players from participating in the Big Four, as they are under the umbrella of different organizations and clubs: Augusta National (the Masters), the PGA of America (PGA Championship), the USGA (US Open) and Royal and Ancient (British Open).

In the war waged with LIV Golf, the American circuit seeks the alliance of these four organizations, but at the moment everything remains in a tense wait. At the heart of the conflict is the large prize pool that the Saudi league has put on the table: 25 million dollars per tournament, four for the winner, more than what the champion of the juiciest event on the PGA Tour receives (The Players, 3.6 million) and almost double what the greats distribute: this course, 2.7 million for the Masters and the PGA, 2.2 for the US Open and 2.07 for the British Open.

Kevin Na, an American of Korean origin, number 33 in the world, has it clear. Faced with the risk of a sanction, he has decided to resign from the American circuit and give himself body and soul to LIV Golf. “I like to exercise my freedom to play where I want, as a free agent,” he said this Saturday. That is one of the demands of many golfers: as self-employed workers, instead of employees of a club, choose the tournaments they play, in whatever field.

It also remains to be seen what will happen to the world ranking (at the moment LIV Golf tournaments will not score), and what will be the position of the European circuit, for which the blow may be harder. But this one does have an important asset: in his hand is to prohibit European golfers from participating in the Ryder Cup, whose next edition is in 2023 in Rome. An exclusion would be a blow to Sergio García, enrolled in the London tournament and top scorer (28.5) and player with the most wins (25) in the history of the competition.

Meanwhile, the LIV Golf is shaping its offer. The new Saudi league announced this Monday that the London tournament, between Thursday and Saturday, can be seen on television through its website, YouTube and Facebook, broadcast by 50 cameras, 16 video towers and drones. Golfers and their caddies will also carry microphones to capture their comments, something that most players had refused to do on the American circuit. After each round, there will be musical concerts on the pitch. The icing on the cake came with the confirmation of Phil Mickelson, 51 years old and winner of six majors, who was removed from the American circuit due to his controversial support for the Saudis.