England’s formula for lowering the number of ‘ninis’: including employment information in secondary school subjects | Education | The USA Print 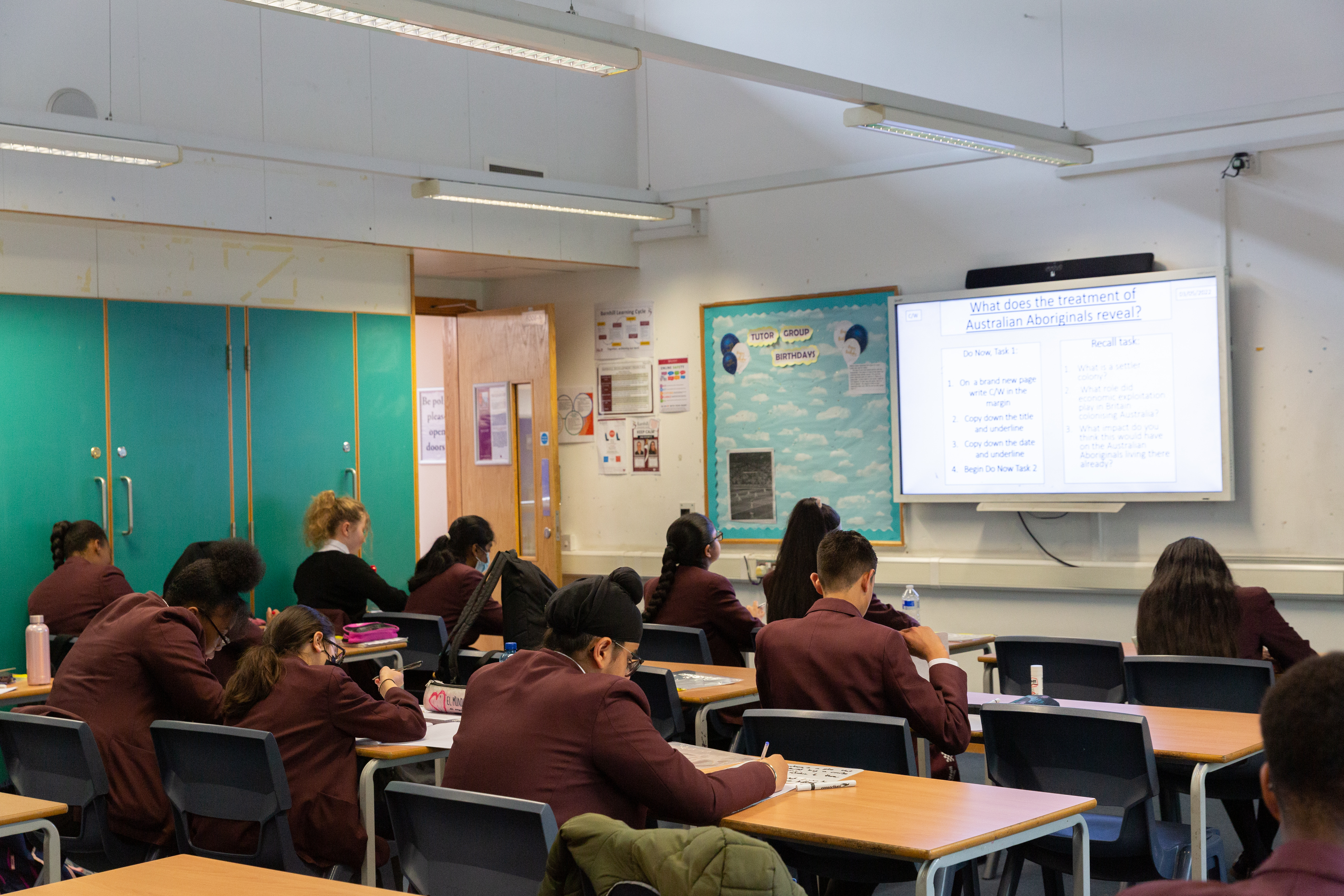 “Our mission is to ensure social mobility.” That is the premise with which sir John Holman, Emeritus Professor of Chemistry at the University of York, set out to revolutionize the way in which adolescents were professionally oriented in English institutes. In 2013, she traveled to six countries and territories—Germany, Hong Kong, Finland, Canada, Ireland, and the Netherlands—to get up close to her “powerful” high school guidance role models. Along with other members of the Gatsby Foundation, for which Holman is a research fellow, he reviewed the published academic literature on best practice and surveyed 10% of secondary schools in England to learn about their programmes. In 2014, Holman published The Good Career Guidance (“good professional orientation”, in English), a report in which he developed eight essential points, such as introducing employment content in the curriculum or ensuring a stay in a company before the age of 16.

In 2017, the British Government, which is responsible for educational competences in England (they are decentralized in the rest of the United Kingdom), placed that document at the center of its new national strategy for guidance in high schools, so that all schools funded with public funds were required to implement Holman’s idea. In 2022, the effects are already visible: in those centers that have managed to meet the eight points, the rate of students who after finishing high school do not continue studying or working has been reduced by 9.7%, known as ninis. In the centers with the most vulnerable students, the decrease reaches 20%, according to data from the British Department of Education.

“It’s about making better use of information about the labor market and the skills that are needed, or knowing how much they could be paid. It is not fair that the fate of young people continues to depend on the information handled by their parents or the contacts they have in companies and privileged access to information”, explains Holman.

According to Holman’s design, every institute has to name the career leader (career leader), a role that a teacher must assume and that consists of designing the professional orientation program, programming the activities and coordinating the work of the rest of the teachers to ensure that content on the labor market is included in all subjects and career opportunities. It will also contact the ecosystem of local companies. That person, whom the Government trains for a year, will be freed from teaching hours to take on that task. The British Government allocates about 30 million pounds a year to the program (about 35 million euros).

Let’s take an example. It’s a Friday in April and the 14-year-old high school students Barnhill High School, on the outskirts of London, have just started English class. It is time to analyze the language used in a selection of job offers from an internet portal. The kids are attracted to chief happiness officer, a job imported from the United States that consists of making sure that the employees of a company are satisfied and do not want to leave. “Do you know someone who is dedicated to this? Would you like it?”, launches the professor, who mentions some studies that speak of a 60% increase in productivity in companies that have this figure. Some joke, they say that they think it’s a bargain to be paid for generating “good vibes” in the teams.

Damian Edwards, career leader at Barnhill, with 1,500 students between the ages of 11 and 18, acknowledges that the greatest weakness of this institute is the links with external entities so that students can access work experience – point number six of the document of Holman states that all students must have it between the ages of 14 and 16. Students with four job encounters are 86% less likely to become ninisand, on average, will earn 18% more than those who did not, according to a study by the foundation Education and Employers published in 2016.

The institute has allocated part of the allocated funds to hire another key figure: the careers advisor, normally an active professional who is paid to have meetings with the students, advise them and design personalized plans for them. “He comes twice a week and we still haven’t gotten all the students to have a session with him. He is focusing on the most vulnerable, those in whom we detect the most likely to drop out of the studies, ”he says. They have managed to get different work companies to hold information sessions in the center on how the labor market is working, with details such as average salaries by specialty. They have not yet been able to introduce career content in all subjects.

The OECD report How youth explore, experience and think about their future (”how young people explore, experiment and think about their future”), published in 2021, points out that modern societies expect “adults to efficiently explore different job possibilities”, but the results of the PISA 2018 report show that students in many countries they are poorly prepared to develop the necessary skills for the different transitions between student and working life. 38% of the lowest achieving students have career ambitions that are not aligned with their academic pathways. “To plan for their future, students need to actively explore the job market,” the document states. Only a third of OECD students claimed to have spent time in companies at the age of 15.

Adrianna, 14, is a student at Barnhill. Her counseling activities have taken her away from the future her parents wanted for her: medicine. “I like art and why shouldn’t I dedicate myself to it? I am sure that I want to work in something that interests me, salary is not my priority. I would like to design advertising campaigns, dedicate myself to creative design”, she says. A few weeks ago she participated in a field trip to Oxford University organized by the institute. “They told us what qualifications we need to get in. They value if you have leadership capacity.” Consider volunteering. She already knows how to make a resume, but she thinks it’s too soon.

“We considered that it was necessary to offer the youngest information on professional opportunities, the skills demanded by emerging industries, which are the ones that are going to offer them the most job opportunities in the future,” explains Jane Hubbuck, of the Department of Education of the British Government . “We have a lot of employers concerned that young people don’t see certain jobs as interesting, they don’t see the value in those sectors,” she adds. In 2014, they founded the agency The careers and enterprise company to connect employers and colleges (it already has 80 people on staff), which was responsible for creating the so-called career hubs, local networks in which schools, companies and volunteers meet to design orientation practices. 65% of the centers financed with public funds are integrated into one.

To audit the entire operation of the strategy, they launched the apps Compass, into which schools regularly enter data. This application allows the Government to know the destination of the students up to three years after finishing high school and to measure how many of the eight points are fulfilled in each center. “We do not look center by center, otherwise we would be encouraging them to inflate the results,” says Jane Hubbuck. The goal is not to compete.

The innovative Spanish model inspired by the Holman model

In the 2020-2021 academic year, the Bertelsmann Foundation and the Funda por Educar Foundation started the Xcelence-Schools that inspire project in 50 centers in disadvantaged neighborhoods in Madrid and Catalonia (35% concerted). Based on the eight points of the model devised by John Holman, they extended the axes to 10. The objective is to awaken vocations that are not limited by their social context. Funded by the consulting firm JP Morgan, it was evaluated in 2021 by UNED teachers. At the moment, they have only analyzed the skills that the new counselors have acquired. To see the progress in the students, at least three more courses are needed. “We have measured their empathy to relate to other teachers, their ability to x-ray the labor market or to encourage vocations in students and the result has been mostly positive,” says Arturo Galán, dean of the UNED Faculty of Education. In the 2022-2023 academic year they plan to be in 300 centers.

Previous article
Junts outlines his new stage without Puigdemont at the head of the party | Catalonia | The USA Print
Next article
The great regression of abortion in the US: the zygote before the woman | Ideas | The USA Print