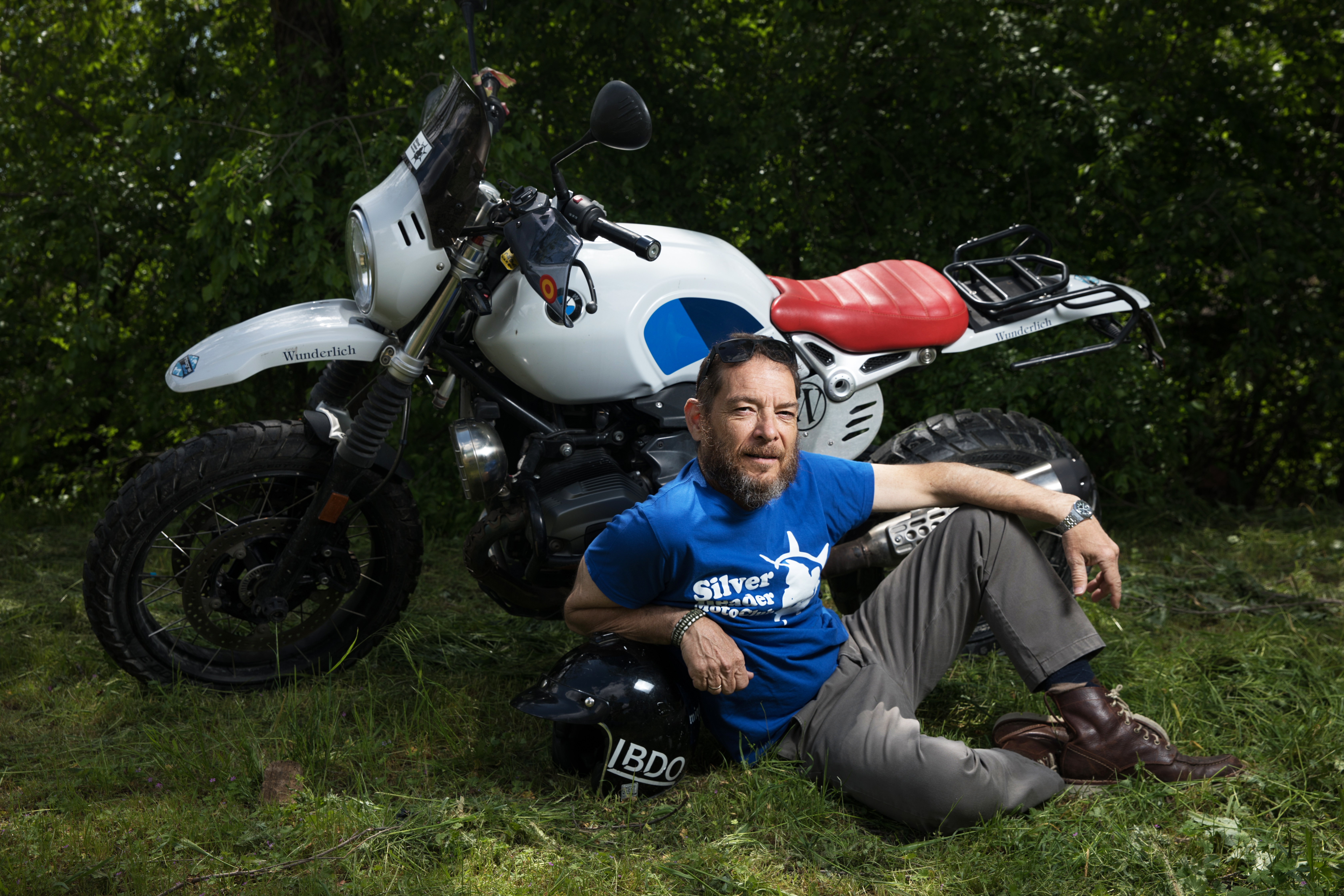 At the age of 35, he already had his life resolved. He had been number one in his promotion in the 2003 property registrar oppositions. Miquel Silvestre (53 years old, Denia) was single, earned more money than he spent and had reached what he considered to be the zenith of job fullness. He was so settled that he saw 40 approaching and feared that his life would not offer him new challenges, so he ended up putting them on himself. With the arrival of the dreaded age, he took a gap year and decided to write a novel. To get some distance from Madrid, where he lived, he went on a motorcycle to Ireland, where he found the trail of the shipwrecked members of the Invincible Armada. He investigated the epic of the expedition and that of Captain Francisco de Cuéllar, one of the survivors of the capsizing. And in doing so, Silvestre realized that in the combination of both worlds, history and motorcycle travel, he had found the true passion of his life. Since then he has traveled the world on two wheels and has told it in books or in formats such as Diary of a nomadseries broadcast on La 2 from 2015 to 2021. Now it premieres a new program, The motorcycle nomad (Odyssey Channel), which since May 10 narrates the adventures of the chronicler through an empty Spain, through the province of Soria, and empty, since he did it during the confinement.

He confesses that traveling through deep Spain has been a very different experience, in contrast to the rest of the “more remote” destinations to which he is accustomed. “I have tried to see my own country with the eyes with which I am going to travel the world. On the one hand, it seemed very exotic to me, and, on the other, I took a great landscape with me. It was a story, like the Amenábar movie [Abre los ojos (1997)] where they closed the Gran Vía and you can see a street that doesn’t really exist, without people, so I was very surprised”. Another of his great conclusions is that he found it to be an “extremely attractive country to travel on the road.”

The motorcyclist, after comparing with the roads he has seen all over the world, considers the level of maintenance of the Spanish “a luxury”. “Spain has the loneliest roads in Europe and in the best condition. You can go to Albania, for example, where you have to be an adventure lover because the roads are completely destroyed many times. However, here there is a fabulous road network in provinces with very little population, in which it seems unbelievable that they take such good care of themselves. It seems to me a privilege”, values ​​Silvestre.

The idea sprouted in 2020 when, with the arrival of the coronavirus pandemic, he was forced to cancel a tour through Pakistan following the route of Alexander the Great, something that he has replicated with different characters and historical events. In one of his first great adventures, the route of the forgotten explorers, which took him a year since he left in July 2011, It crossed areas of Europe, Africa, Asia and America to commemorate great Spanish travelers who today enjoy less recognition. Among them, Pedro Páez, who discovered the sources of the Blue Nile in the interior of Ethiopia; Salvador Fidalgo, who in 1790 founded Valdez, the northernmost Spanish city in the world, in Alaska; or Francisco de la Bodega y Quadra, Juan de Fuca and Dionisio Alcalá Galiano, who were the first Europeans to sail and set foot on Vancouver Island, in British Columbia. In one of his last adventures, in 2019, he went in the footsteps of Genghis Khan and crossed Central Asia until he reached Mongolia.

But just as the Mongol conqueror had Storm or Alexander the Great had Bucephalus, Silvestre does not walk the path alone. Normally, he does it on the back of La Gorda, a BMW R 1200 GS, his most iconic motorcycle and his right eye among his entire fleet, with which he has traveled more than 150,000 kilometers. In his garage he has a choice, and he also highlights Atrevida, with whom he went around the world, or Etheria, who owes her name to a Hispano-Roman traveler from the fourth century, and from whom she does not separate during the entire interview.

Also Read  Olive Lawn hearth supervisor who stated: 'In case your canine died, deliver it again and turn out it'

But La Gorda has something special for him: “She has become another character in my story. It is the first motorcycle with which I started doing adventure trips. He was on the trip The emotion of the nomad, the most initiatory, where I tour Ukraine, Russia, Kazakhstan, the Silk Road… Those experiences remain engraved on the motorcycle, in your experiences with the motorcycle. And when you take a trip like this and your life depends on them, and you talk to them, and you get angry, and you yell at them and treat them with love, they are like friends. So there is a personal bond that makes it very difficult for you to let go, ” account on your YouTube channelwhere he accumulates 120,000 people who follow his adventures from day to day.

Silvestre confesses that the trips have changed his life for many reasons. The most direct: during an interview, he met a journalist who is now his wife, and with whom he has two children. Because of them, he cannot afford to renege on his job as property registrar, but on his vacation, with the permission of his family, he escapes on his motorcycle. He admits that he would be “an unhappy man if he didn’t make these trips”. They have also changed his perspective of his world, of which above all he wants to convey two things: the first is that “we are lucky because reality is populated by 80% of people who live in intolerable conditions”; and the second is that we are capable of doing many more things than we think, “because they inoculate you with fear in this society”. He has only feared for his life in 2008, in Mauritania, when he ran out of gas and in hostile territory, he did not rule out a possible kidnapping. But his stories have always ended well, and Silvestre jokes that, as long as there is gasoline left, he will continue burning both wheels on the asphalt wherever he wants to go.

Previous article
What to watch today on TV? Tuesday, May 31, 2022 | TV | The USA Print
Next article
“Obi-Wan Kenobi”: A Star Wars statement asks fans not to “choose to be racist” after Moses Ingram receives hate messages