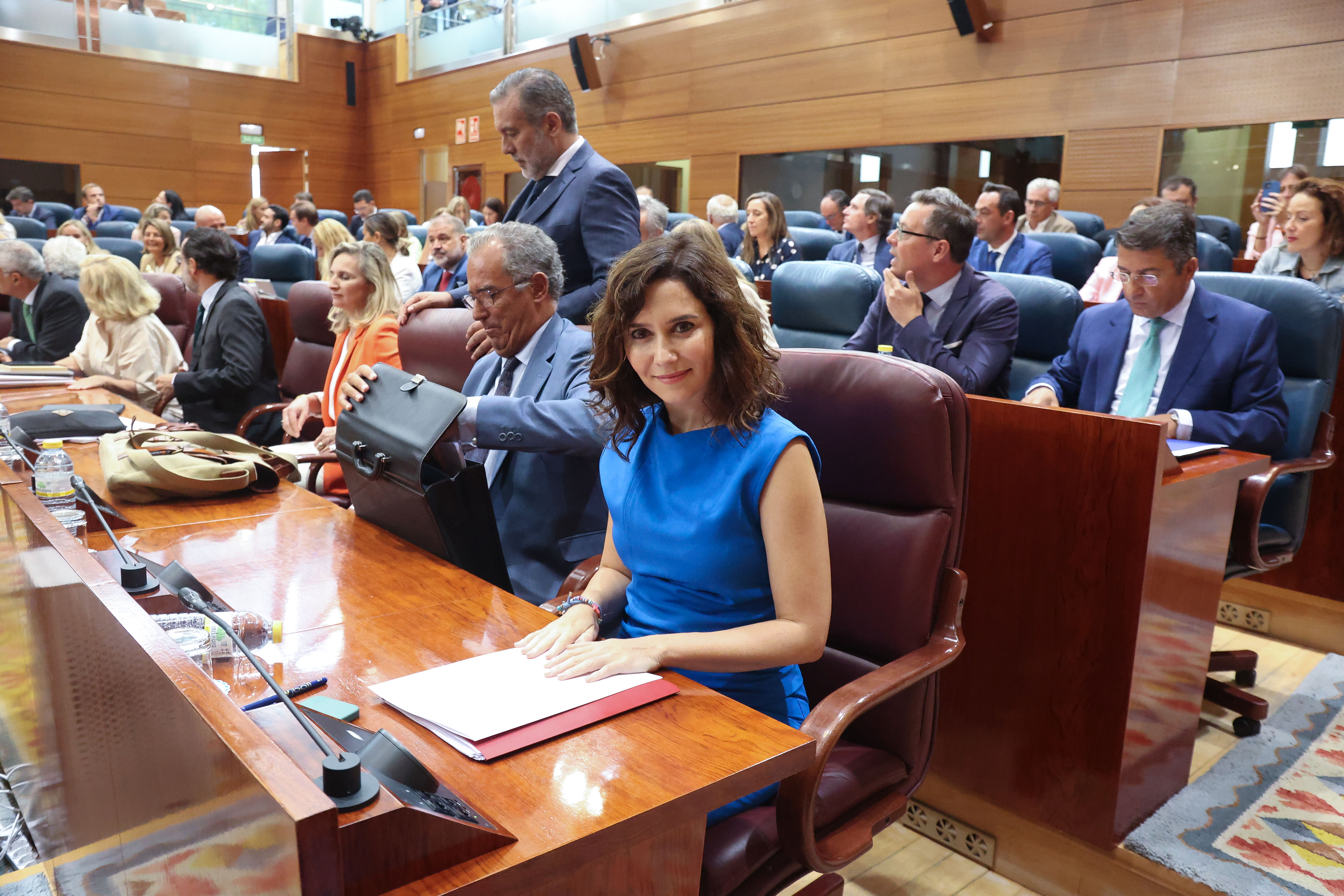 ETA. The case of the ERE of the PSOE governments in Andalusia. Or the diplomatic crisis between Spain and Algeria. The president of the Community of Madrid, Isabel Díaz Ayuso, has started the debate on the state of the region this Monday by dusting off the toughest arguments of the PP, without caring that they have nothing to do with regional politics, and with the aim of paying the ground for the warning contained in his intervention. “The central government is acting like an arbitrary government, which imposes without dialogue,” she says. “(…) Deceiving society in this way is how Bolivarian communism has spread in Latin America,” she continues. “And it is that Spain is headed for Bolivarian nonsense if those of us who defend freedom and the rule of law do not know how to live up to it,” she adds. The PP bench applauds furiously. The former president Esperanza Aguirre, or the mayor of the capital, José Luis Martínez Almeida, also do so on the platform. None understand that these words are hyperbolic, exaggerated or excessive. On the contrary. The Ayuso style has been imposed on the Madrid PP, and with it the Madrid Executive has established itself as the party’s battering ram against the Government of Spain.

Everything happens in the Madrid Assembly, to where Ayuso travels three months after his last appearance, back in June, so long have been the vacations of all his lordships. It is a day designed to suit him. Only the regional president intervenes, without a time limit. For the next day, Tuesday, it is the turn of the opposition, to which the president will be able to reply whenever she wants (party by party, or all at once) and as she wants (again, without a time limit on the reply ). And the baroness does not miss these favorable circumstances: while the opposition deputies lose their eyes on their Ipads, those of the PP enjoy a couple of hours of speech that makes them the spearhead of their party against Sánchez.

“I could present myself to you satisfied with the work carried out in the last year, after the May 4 elections, in which the Popular Party obtained more votes than the entire left together, a defeat that forced it to change its leaders,” he says. , celebrating, without saying so, that his victory caused Pablo Iglesias to leave politics, or the departure of Ángel Gabilondo (today Ombudsman). “[Pero] We live in such a serious economic, social and political moment that it prevents us from recreating our successes”, he adds. “The political and economic situation in which the Government of Pedro Sánchez and his associates has plunged us is unsustainable, the massive impoverishment of the Spanish people, even among those who have a job, is getting worse by the minute,” he highlights. “On May 4, 2021, here, in the Community of Madrid, the great turnaround in Spanish politics began,” he concludes, ignoring that on that day he celebrated the victory with Pablo Casado, later ousted due to the open conflict between the two, and without ever mentioning Alberto Núñez Feijóo, the party’s new national leader.

Because Ayuso has come to talk about Ayuso. It does not matter that the PP is a triune party for electoral interest, in which she, Núñez Feijóo, and the president of Andalusia, José Manuel Moreno Bonilla, share the roles to reach as many voters as possible. With the May 2023 elections already on the horizon, the day should serve to vindicate the government work of the Díaz Ayuso Executive, launch promises with the polls in mind, and present the conservative leader and her team as a guarantee against the crisis that is coming after the pandemic and the invasion of Ukraine by Russia.

“Inflation is destroying families,” says the president of Madrid, who places the fight against rising prices as the first of the “seven urgent and important challenges” she faces.

In this battle, Ayuso agrees to deflate personal income tax in the 2022 income statement (which will be done in 2023); he lists already known tax credits; announces that the new self-employed will not pay a fee during their first year of activity (nor during the second, if they invoice below the minimum interprofessional salary); hourly freedom in the taxi; 7.5 million for free breakfasts for students from vulnerable families in schools; or that the Community is going to increase the amount of the Minimum Insertion Income by up to 40% starting next year to improve the circumstances of the 3,400 vulnerable families in the region who do not meet the requirements established in the Minimum Vital Income.

The president of Madrid also advances a salary increase for Madrid teachers of up to 1,260 euros per year; their willingness to negotiate an improvement in the remuneration of more than 22,000 temporary SERMAS workers, which had already been promised, without being fulfilled, in 2018, according to the unions, and whose fixity requires the new national law to tackle temporary work; or that the reopening of primary care emergencies will finally be done through 78 Continuous Care Points (PAC), all with medical and nursing staff. In other words, it will not return to the previous model, closed with great controversy, since it allowed to serve 700,000 people from Madrid.

To be announced, Ayuso even announces that the Community of Madrid will create the first training campus for electronic games in Spain; or preparing a large video surveillance deployment at strategic points in the region to reinforce the security of citizens using new technologies in the field.

There is, then, an announcement, and another and another: up to 60 measures with the 2023 elections ahead. On balance, nothing. After more than three years at the head of the Community of Madrid, the regional president does not bring up great successes, promises kept that have changed the region, or reforms that were in her electoral programs and have already been carried out. The past and the present, the reflection on what has been done, are covered by the promises of the future, many of them already known, some of them already made by previous Executives of the PP, a party that has governed Madrid since 1995. Díaz Ayuso speaks, and the opposition takes good note to support its replicas this Tuesday, in which the leftist parties will remember that the health centers that are promised now have already been promised before; or that the wage increases of the toilets are the result of the union struggle and the mobilization before the justice system.

And then, Ayuso finishes. And an ovation bursts out, the PP deputies standing up. Not even three minutes have passed since the end of the speech, the words and applause are still floating in the air, when Aguirre appears to hug Ayuso next to his seat. It is the photo of yesterday’s PP with today’s PP. On the day in which the current president has charged harshly against the PSOE for the case of the ERE ―”They have not been able to recognize anything, to apologize for anything, to commit to never repeating it again. There is no hope that the money will be replenished”, he says―, the baroness who directed the region takes on a leading role while the plots nested in the shadow of the Public Administration. Punica, Gürtel or Lezo.

The hug serves as a reminder that in Ayuso there is enough of Aguirre, and vice versa: power, leadership, and Madrid, its government and the majority in the Assembly as a speaker to intervene in the politics of all of Spain.

Elections: The new face of Brazil | Opinion | The USA Print

The European Union agrees on a joint rearmament in the face of the Russian threat...

Colombia Elections 2022: Álvaro Uribe disappears from the political scene for the first time in...

Damien Abad: Rape accusations against a minister hinder the start of Macron’s mandate | ...