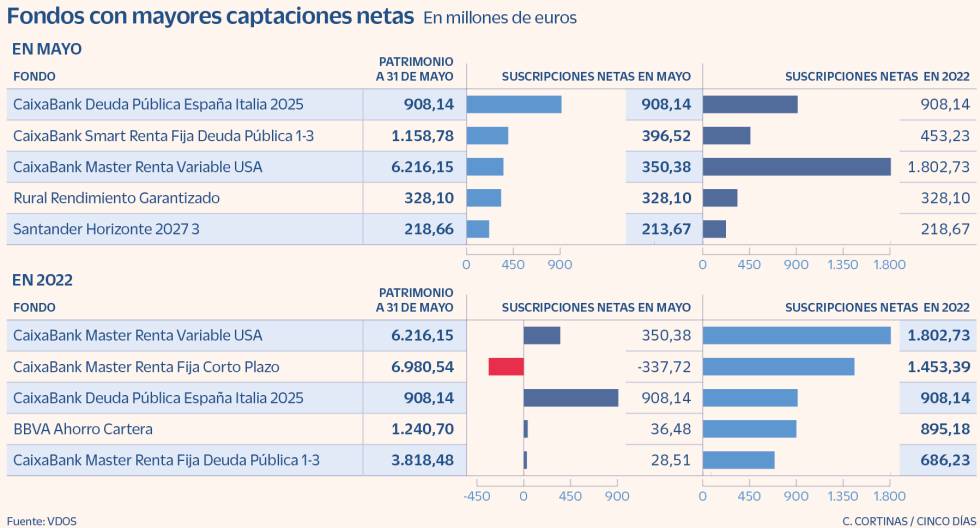 The increase in the remuneration of time deposits will have to wait for the time being. CaixaBank, the country’s largest commercial bank, is focusing on the sale of fixed-income funds in the new market environment of rising interest rates, with an overwhelming rate of savings in these vehicles in the month of May .

At the beginning of that month, it registered a new investment fund, the CaixaBank Public Debt Spain Italy 2025 with which it has achieved net subscriptions during May for 908 million euros. In just one month, this fund, which invests in Spanish and Italian sovereign debt maturing around 2025, has positioned itself as the third that has raised the most new money so far this year, according to data collected by the consulting firm VDOS. It is only surpassed by two other funds from the manager of the financial institution, the one with the largest assets managed in the country, the CaixaBank Master Renta Variable USA and the CaixaBank Master Renta Fixed Short Term, both funds included in the discretionary portfolio management service.

The CaixaBank manager has been at the forefront of a common trend in the market, since fixed income funds were by far the ones that captured the most fresh money in May, with net subscriptions of 1,458 million euros according to data from Inverco, of which more than 900 million correspond to the aforementioned CaixaBank Asset Management product. Sources from the manager point out that it is money contributed mainly by private investors – from 600 euros at least. They acknowledge that they have recently taken advantage of “the rise in market rates to launch several public debt funds that have been very well received by investors.” In March, the manager launched the CaixaBank Public Debt Spain Italy 2027.

The commercial commitment to fixed income funds comes at a time that will be a turning point for conservative savings. The rise in interest rates that the ECB foresees for next July will allow returning some expectation of profitability to savings in deposits, condemned to zero for years. Although, from the outset, the banks are taking advantage to channel savings into fixed-income funds, in a market environment that is already saying goodbye to negative returns. Thus, the managers agree that the time is right to create a fixed-income portfolio, with now higher yields and asset prices that have practically bottomed out, after making heavy losses in the year. “The return offered by governments has reached levels not seen in the last six years,” they point out from CaixaBank AM.

For financial institutions, the channeling of conservative savings towards fixed-income funds in this environment of rate hikes is also a guarantee with which to continue ensuring fee income. The two Spanish and Italian sovereign debt funds recently launched by CaixaBank have a minimum management fee of 0.1% and a redemption fee of 4%.

Ibercaja. This financial entity has also taken advantage of the month of May to launch two new fixed-income funds, one of them for sovereign debt from Spain and Italy and another for investment-grade European corporate debt. They have a non-guaranteed return target of 0.85% APR for sovereign debt and 1% APR for corporate bonds.

Santander. In March, the bank’s manager launched a new version of the Santander Horizon 2027, which invests in corporate debt, and the Santander Summit 2027, also in private fixed income, and which allows 10% of the portfolio to be allocated to debt below the credit grade. investment. The first of them has captured a heritage of more than 370 million and the second, about 200 million euros, according to VDOS data.