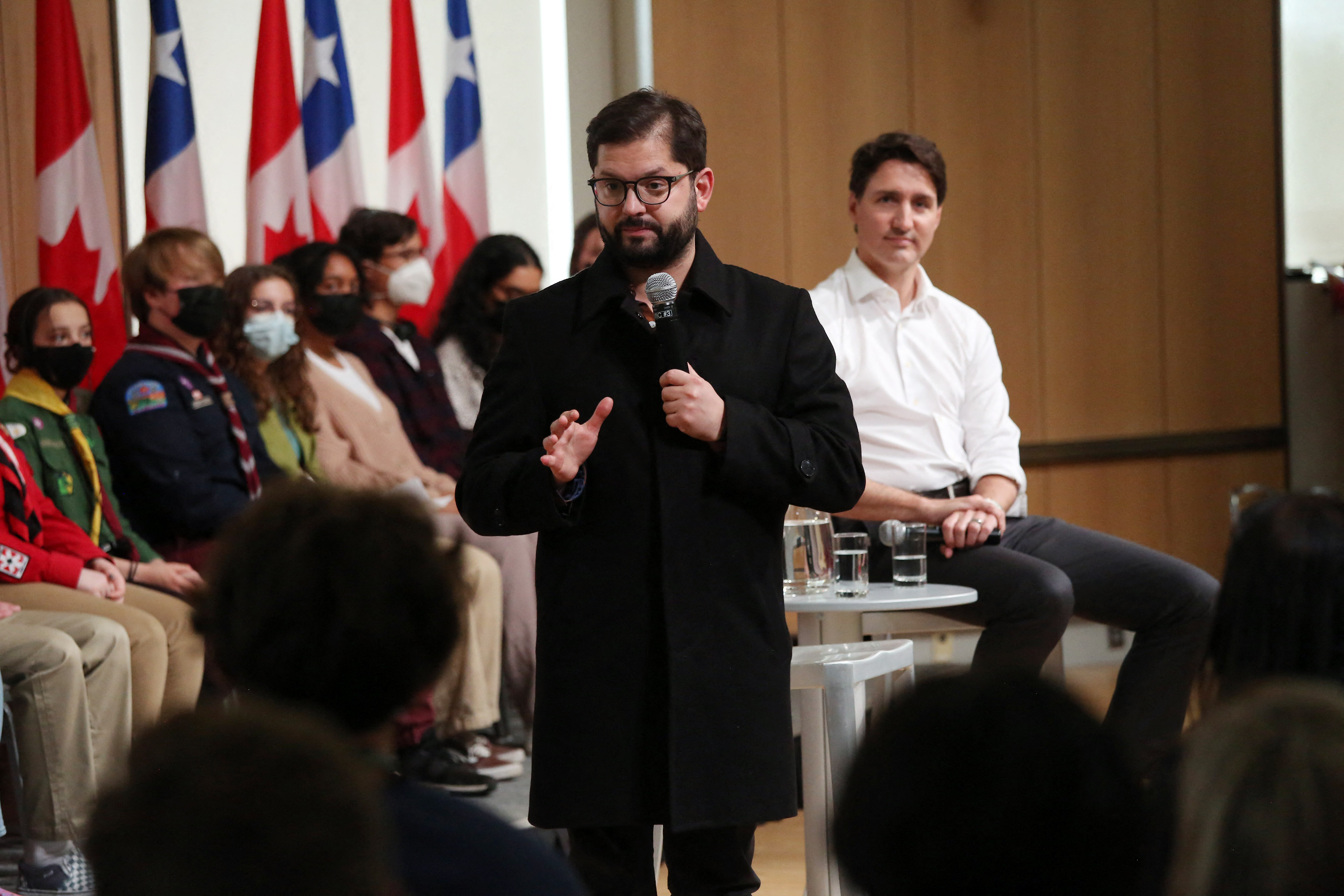 Gabriel Boric made an official visit to Canada this Monday before traveling to Los Angeles to participate in the IX Summit of the Americas. The President of Chile met in Ottawa with Justin Trudeau, Canadian Prime Minister, among other activities. The Chilean president’s agenda is focused on the climate crisis, indigenous peoples, gender equality and human rights. Boric and Trudeau coincide in numerous visions and concerns, and despite the fact that their trajectories are far from similar, both have sought to move away from a stuffy style in the political sphere and to open channels of dialogue.

Justin Trudeau has said, in reference to Boric: “It is very exciting to see the emergence on the continent of a progressive voice with an exciting agenda”. The President of Chile, who has underlined the “shared values” between both governments, has answered for his part: “The world is changing even faster than we thought and the world needs countries like Canada and Chile”.

During this visit, it was announced that Canada will co-sponsor the Declaration of the Americas for the Protection of the Ocean, an initiative created by Chile to promote joint protection work for the Pacific. Both countries have published a joint document to point out that the pricing of polluting emissions is one of the most effective ways to reduce emissions and create jobs.

The leaders have also signed a memorandum of understanding on gender equality and women’s empowerment. The objective is to establish a framework that favors progress on these issues. Boric and Trudeau have also addressed the relationship with indigenous peoples. Boric has pointed out that it is a common issue for Chileans and Canadians, and where “recognition and a new treatment is required” towards these groups. Likewise, he has called for an absolute defense of human rights, “where these cannot be allowed to be called into question according to the color of the Government that violates them.” Boris has also had a meeting with businessmen and Chileans living in Canada, in addition to a meeting with high school students, in which Trudeau has been present.

Gabriel Boric and Justin Trudeau share a long list of causes, they also have in common experience as legislators, a commitment to building bridges and a willingness to connect with citizens with a fresh style. However, Boric cut his teeth in university assemblies and his victory represented a watershed in Chile’s partisan tradition, while Trudeau began to venture into politics with a zigzagging resume under his arm and a surname on his back that embodies the ideals like no other. of the Liberal Party of Canada—his father led the country from 1968 to 1984 (with a brief interruption in 1979). The Liberals have alternated the helm of the Canadian government with the Conservative Party, but had nearly a decade of meager results before Justin Trudeau took the reins of the group.

Gabriel Boric was sworn in as president last March, at the age of 36. Justin Trudeau became Prime Minister in 2015, at the age of 43. Although after almost seven years in power, the image of the Canadian leader has been eroded by several scandals, broken promises and contradictory decisions.

Boric’s visit to the North American country – which has lasted 14 hours – is the first by a Chilean president since 2013, when Sebastián Piñera held official meetings with Stephen Harper. Chile and Canada have had diplomatic relations since 1941. Following Augusto Pinochet’s military coup, Ottawa sheltered some 7,000 Chileans. Both countries have a free trade agreement for 25 years. In 2021, Canada exported more than US$950 million worth of goods to Chile; Chilean imports were around 1,400 million.

Trudeau has declined to respond at a press conference in Ottawa regarding the possible impact among Canadian investors of the mining reforms planned in Chile (it is the second country with the largest presence on Chilean soil in this sector, only behind the United States), although it has indicated that democracies and their leaders must seek to update themselves based on changes in the world, both for moral and practical reasons.

Boric and Trudeau will participate in the IX Summit of the Americas in Los Angeles (California). The Chilean president has described in Ottawa as an “error” the decision of the US Government to exclude Venezuela, Nicaragua and Cuba from this meeting. The premiere The Canadian has not commented on the US veto, but has indicated that his country hopes to participate fully in the summit.