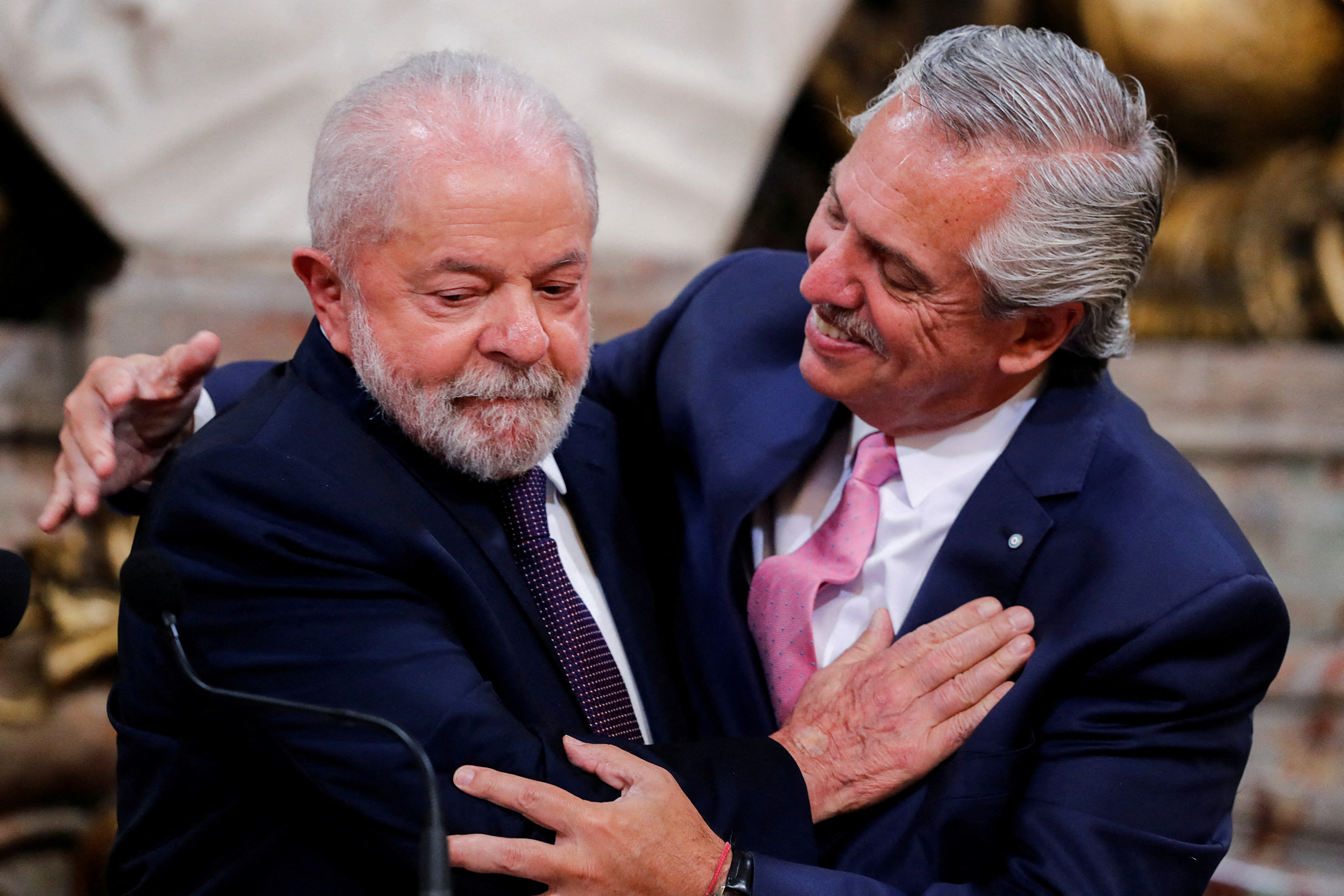 The governments of Brazil and Argentina have decided to jointly promote the creation of a common currency that, if successful, could be called the South and have a regional scope. This long-term project has been the most striking of the relaunch of the bilateral relationship presented this Monday in Buenos Aires by the presidents Alberto Fernández, of Argentina, and Luiz Inácio Lula da Silva, of Brazil. The presidents have also promised to promote bilateral trade and the development of joint projects, among which Argentina trusts that there will be a gas pipeline to export gas to the neighboring country.

“A new story begins,” Lula said at a joint press conference with Fernández where both presidents exchanged hugs and praise that show the good harmony between both leftist leaders. “I am back to make good agreements with Argentina. To share the construction of what remains to be built. To help Argentina and Brazil grow economically”, he added.

The recovery of a key international ally gives oxygen to the Peronist Fernández in a year marked by the presidential elections next October. Inflation in 2022 was close to 95%, the highest in three decades, and the impossibility of going to international markets in search of financing complicates the execution of large public works.

One of the most urgent infrastructure projects for the Argentine government is the Néstor Kirchner gas pipeline. The Fernández Executive has already tendered the first part, from Vaca Muerta, in the south, to the center of the country. Now it has asked Brazil to finance its extension to the border shared by both countries in order to be able to export the surplus. Argentina stopped being a gas exporting country years ago and every winter is forced to buy bottled liquefied gas from Bolivia. These imports require spending up to 1,200 million dollars per month in the coldest months of the year.

“I think we will be able to create the conditions to help build the gas pipeline,” Lula anticipated during the press conference. “Brazil and Argentina are facing a great opportunity: Brazil, to access cheaper gas than what it buys today from Bolivia and Argentina, to open a market with volumes that up to now can be dispatched to the Uruguayan thermal power plant or to Chile abroad. of the peak periods”, added the Argentine Minister of Economy, Sergio Massa, at a press conference in the afternoon.

The common currency that Argentina and Brazil have in mind will not be like the euro that circulates freely in various countries, but a currency for commercial and financial transactions that in no case would replace the Brazilian real or the Argentine peso. It is a project still in its infancy, the Brazilian president has acknowledged. “We are waiting for our (economic) teams to make us a proposal,” Lula admitted in the appearance.

The press conference was marked by doubts about the presence of Nicolás Maduro at the CELAC summit —later he confirmed that he will not attend for fear of protests— and about how to address the political crisis in Venezuela. Lula has framed the plans for a common currency in the interest of both countries to depend less and less on the dollar for international transactions. But the Brazilian has also admitted that a project implemented along these lines by the governments of Argentina and Brazil more than a decade ago had modest results. “It was a timid experience that did not flow as strongly as we expected,” he said after recalling that the initiative consisted of each country authorizing payment in the other’s currency.

Also Read  Colombia Elections: The hour of the nobody and the counterweights | Presidential Elections Colombia | The USA Print

Just a few hours earlier, his finance minister, Fernando Haddad, had explained to reporters that the main objective of the project was how to help Argentina buy Brazilian merchandise without damaging its dollar reserves. “Trade [bilateral] it is really bad and the problem is precisely the currency. So we are looking for a solution, something in common that can make trade grow,” Haddad, of the Workers Party, said on Sunday upon arriving in Buenos Aires, Reuters reports. The minister himself said that it could be “a common trade unit” to which other countries in the region join, but he ruled out putting a single currency into circulation.

In a 16-page document, the leaders have broken down the ambitious strategic alliance that they intend to carry out. It includes the reduction of commercial obstacles and proposals for energy integration such as the promotion of binational projects and the creation of a South American energy market; and initiatives in scientific, technical, educational and cultural matters.

Throughout the press conference, the closeness and complicity between the two leaders has been evident. Lula was moved to remember that Fernández visited him when he was imprisoned and has taken the opportunity to apologize to the Argentines “for the rude words” said against them by “the previous president, whom I call genocidal”, for his management of the pandemic, has said.

Fernández, in turn, has once again demonstrated his support for Lula after the assault on the Congress, the Presidency and the Supreme Court of Brazil carried out by supporters of Bolsonaro. “I want you to know that from Argentina we will always be by your side, but we are not going to let any delusional attack on democracy and the institutions of Brazil. We are not going to let any fascist attack popular sovereignty”, defended Fernández.

In one of those winks that delight his interlocutors, Lula has confessed that in the last World Cup he encouraged Argentina (it is understood that after the Canarinha was eliminated) because Messi deserved to crown his career with a World Cup.

Subscribe here to the EL PAÍS America newsletter and receive all the latest news in the region.