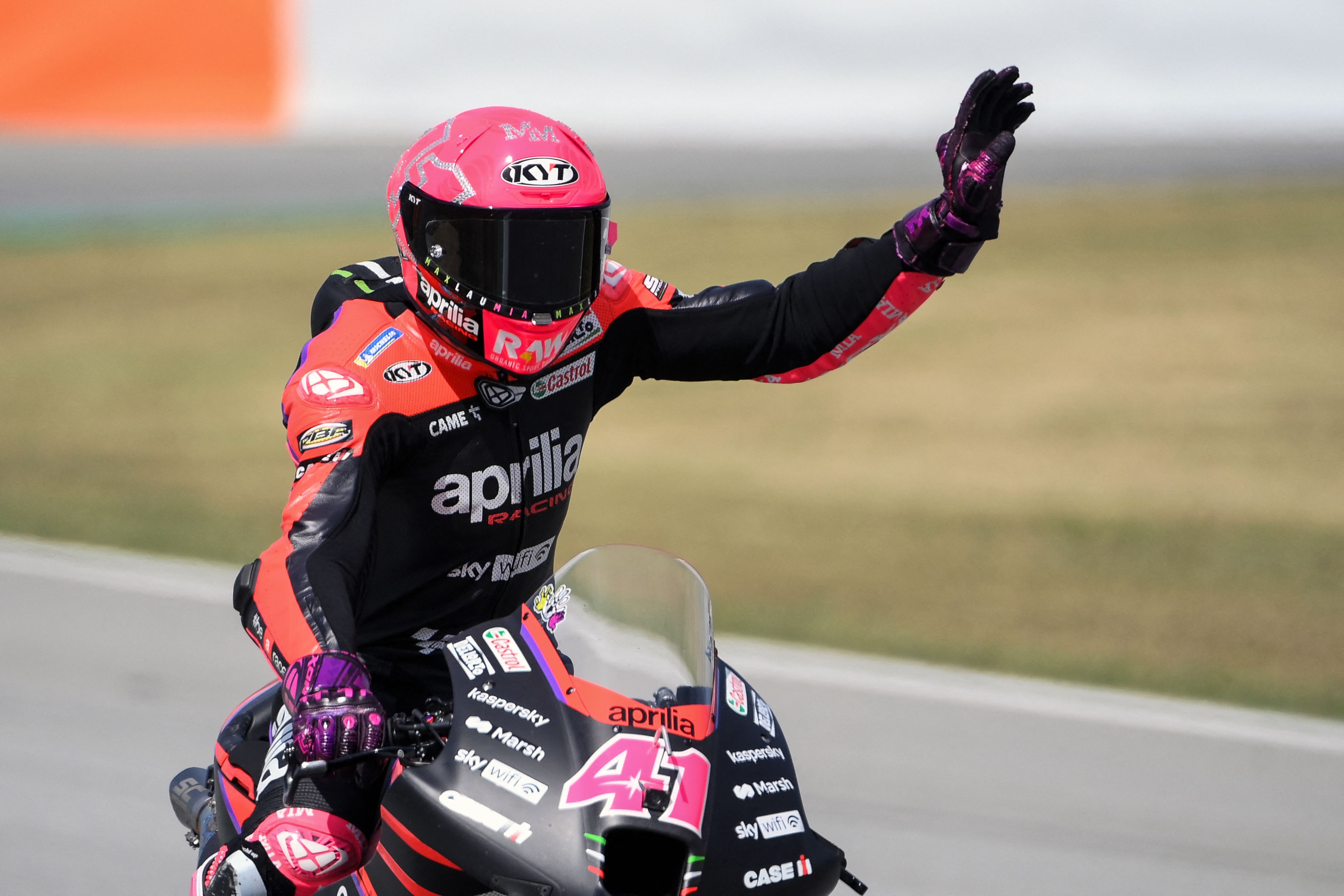 There was nothing to imagine that Aleix Espargaró would finish the Catalan GP in a disconsolate tear. In an almost flawless weekend, the man from Granollers, second in the World Championship just eight points behind Fabio Quartararo, had left a good feeling from the first free practice sessions. On Saturday, in qualifying, he got the pole by few hundredths and, confident, he faced Sunday’s race as his great opportunity to take the reins of the championship. But everything was cut short. One lap from the end, when the Aprilia rider crossed the finish line in second position, with no chance of victory, he released the throttle lever and began to greet the fans present in Montmeló. In the box they could not believe it. “It was thought that it was over and there is one lap left!” They shouted on the DAZN broadcast. More than twenty seconds later, seeing that his rivals did not slow down, Espargaró lowered his head and accelerated again. Too late. He lost all chances of being second and, after overtaking Luca Marini on the last lap, the real one, he was able to finish fifth.

“I’m very sad, if they puncture me right now they won’t even draw blood,” he said, crestfallen, in the interview after the race. Minutes before, the Spaniard had returned to the Aprilia box desolate, crying under the visor of the pink helmet that honored his daughter Mia, born four years ago with severe heart disease. The applause of all his mechanics or the consolation of Carmelo Ezpeleta, CEO of Dorna, were of no use. Espargaró, 32, knew the mistake was his: “You can’t afford a mistake like that fighting for a Moto GP championship. I feel very bad for the team, I can only apologize to them”.

The origin of the mistake is in the tower of the Circuit de Catalunya. Unlike the rest of the World Championship circuits, Montmeló marks the penultimate lap as L1 —lap 1— and the last as L0 —lap 0—. In all the others, the last turn is L1. “I didn’t have much time at the exit of the corner, so I could only look at the board [del equipo] the difference with Jorge Martín. I have looked at the laps in the tower”, said Espargaró after the race. The one from Granollers, of course, did not remember the exceptionality of Montmeló: “I haven’t remembered, really. He knows me very bad. This can’t happen, so I can only apologize to the team again. We had done a very good job, but hey, these are things that happen”.

It is not the first time that the tower on the main straight has triggered such a confusion at the Catalan GP. In 2009, in the 125cc category, Julián Simón, also from Aprilia, from Toledo, believed that he had won the race one lap from the end and, as happened to Aleix Espargaró this Sunday, he lost several positions to finish fourth. The rider from Villacañas, suffocated by the mistake, acknowledged after the race that he thought it was the last lap: “When I wanted to react, I was in sixth, with the bike drowning. I’ve pulled the clutch, but it couldn’t be. When things like this happen, one has a tremendous idiot face. And that’s the worst”.

Had he been second this Sunday, Aleix Espargaró would be just 13 points behind Fabio Quartararo, the sole leader of the Moto GP World Championship. Now, after his mistake, the Catalan is 22 off the lead, almost a full race: “Right now I don’t care if I’ve lost nine or 900 points. I wanted to get on the podium, I wanted to win and I couldn’t do it”.