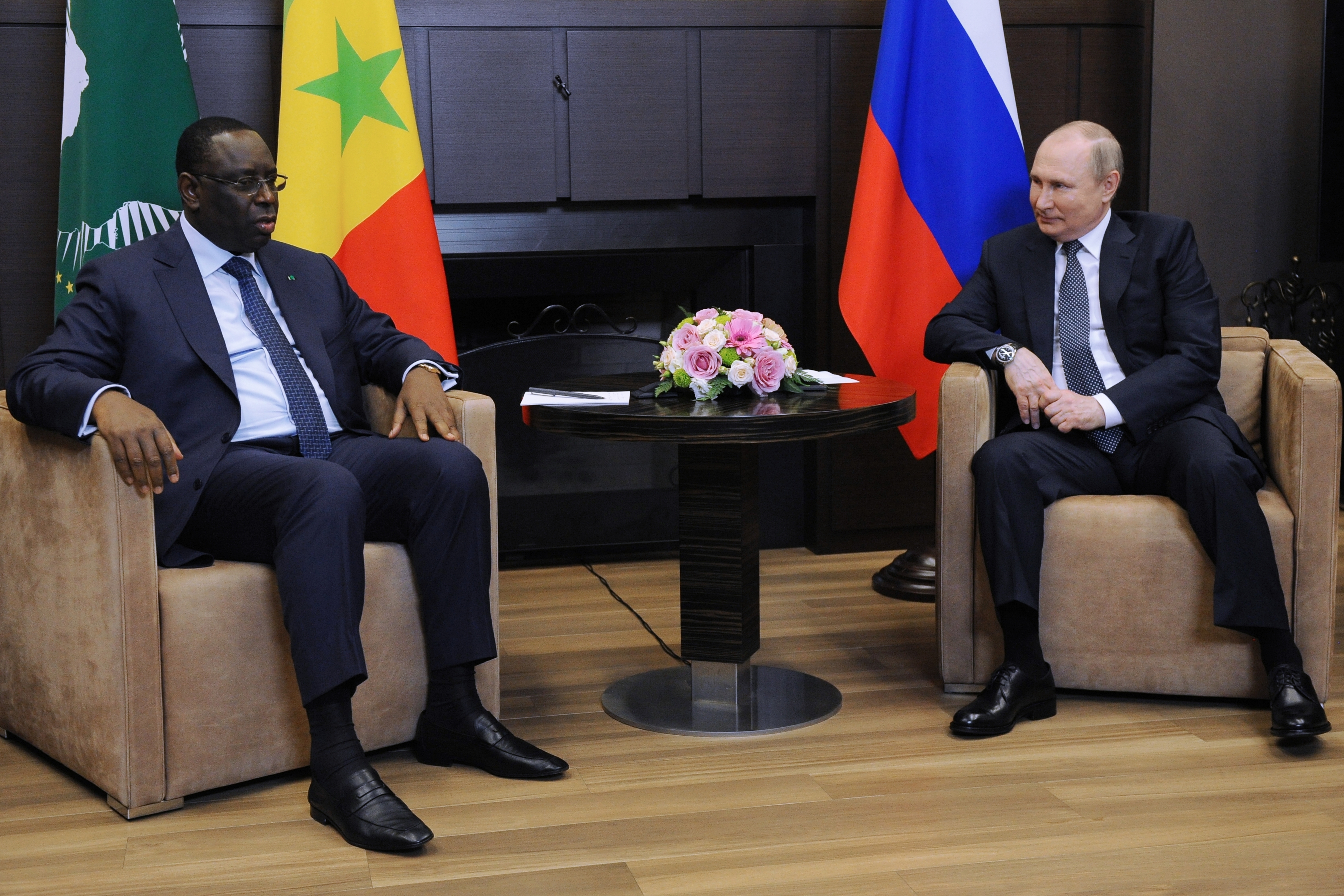 The current president of the African Union (AU), the Senegalese Macky Sall, has called on Russia this Friday for a truce in the war in Ukraine and to release the reserves of tons of cereals and fertilizers blocked in both countries due to the conflict to prevent the food crisis suffered by the African continent from worsening further. Sall has evoked a catastrophic scenario if the conflict continues, while Russian President Vladimir Putin has blamed Western sanctions for the crisis. In a subsequent television interview, the Russian president has assured that his Armed Forces will not assault Odessa – the main coastal city of Ukraine – if kyiv demines the sea to unblock the transport of grain, and that he will not put conditions on the passage of transport ships through the Black Sea.

Both leaders met in the Russian city of Sochi, a meeting that was also attended by the president of the AU commission, the Chadian Moussa Faki Mahamat. The African mediation attempt in this conflict arises from the enormous concern that exists on the continent over the rise in prices of basic food products, particularly flour, but also fuel.

The meeting gives some international backing to Moscow at a time of great isolation. Sall stressed at the beginning of his meeting with Putin that several African nations support Russia in the face of UN resolutions condemning the invasion of Ukraine. “The position of the African continent is very heterogeneous and, despite enormous pressure, many countries have not condemned the Russian position,” stressed the Senegalese president, who regretted that his continent, Asia and South America have been affected “by a distant conflict.

In the television interview, on the Rossiya 24 channel, Putin defended that the West blames Russia for a food crisis that, in his opinion, already began before starting his military campaign in February. In any case, this has been aggravated by two circumstances that have the Russian offensive as a common link. On the one hand, the fighting in Ukraine and the blockade of its ports have meant that Europe’s granary and the world’s fifth-largest grain exporter cannot sell its crops abroad. On the other hand, Putin ordered in early March that his country not export fertilizers or grain in response to the sanctions that have been imposed due to the conflict. The president himself conditioned the end of the restrictions to the resolution of this problem in the calls that he had these days with the Italian Prime Minister, Mario Draghi, and with the Turkish President, Recep Tayyip Erdogan.

A solution in two weeks

Regarding the maritime blockade, the Russian Foreign Minister, Sergey Lavrov, will visit Turkey next Wednesday to address an issue that the Kremlin has considered “priority” this Friday. After his meeting with Sall, Putin assured that no ship would be threatened. “We will ensure the security of access to these ports and we will ensure the entry of foreign ships and their movement along the Black Sea and the Azov Sea in any direction,” he promised.

In an interview with EL PAÍS, the spokesman for the Turkish government, Ibrahim Kalin, stated that this problem could be resolved “in the next two weeks”. “It will probably be an operation under the UN umbrella, with Istanbul as the main center of the operation. There will be Russian and Ukrainian representatives who will manage and monitor the process,” the Ankara representative explained.

Moscow accuses Ukraine of having mined its ports, including Odessa and Mariupol. Before the beginning of the Russian offensive, this problem did not exist. Both countries contribute approximately a third of the world’s wheat production, and according to the UN, Russia is the world’s leading exporter of nitrogen fertilizers, the second of potassium and the third of phosphates. Putin was counting on this dependence on the global food chain and on March 11 banned the export of fertilizers in the wake of the sanctions.

In addition to proposing the demining of the Ukrainian ports with the Black Sea fleet in front, Putin offered another option: lift the sanctions on his ally Belarus so that the crops are transported through that territory.

Precisely this Friday, the Belarusian president, Aleksandr Lukashenko, and the UN Secretary General, António Guterres, discussed the matter. The Belarusian president offered “all kinds of rail assistance” to transport Ukrainian grain to Baltic ports “if they are opened to Belarusian products”, sanctioned by the West since its brutal repression of the 2020 electoral fraud protests, in the that Lukashenko was re-elected.

The spokeswoman for the Russian Foreign Ministry, Maria Zajárova, reiterated that Russian exports of fertilizers and grains will depend on the lifting of sanctions against her country. “In order to satisfy its political and, incidentally, commercial interests, the West is the one who has introduced restrictions on the entry of foreign ships into Russian ports, serving Russian ships in foreign ports, and who has created insurmountable barriers in insurance. and bank transactions,” said the spokeswoman, in statements collected by the Tass agency.

However, the sanctions do not affect the transport of food. To calm the concern of shipping companies and insurance companies, the US ambassador to the UN, Linda Thomas-Greenfield, assured this week that Washington is preparing “reassuring letters” where it will be put in writing that they will not be affected by the restrictions on exporting Russian food and fertilizers.

Despite having enormous natural resources, one of Africa’s great problems is its strong dependence on foreign countries, especially for energy and food. In this context, both Russia and Ukraine are key suppliers of grain and fertilizer. The possibility of disturbances and instability due to the rise in bread or gasoline, as has happened in the past in the countries of the Maghreb and Sudan and just a few days ago in Guinea, is another of the consequences of inflation.

A recent United Nations study ensures that 44% of imported wheat on the continent comes from both countries: 32% from Russia and 12% from Ukraine. For this reason, the blockade on exports of this cereal, essential in the diet of millions of Africans with which bread and other basic products are made, is at the origin of the food crisis that is already showing its worst face in Africa and that has come to join the numerous conflicts, shock climatic and price rises due to covid-19 that had already triggered poverty and malnutrition in Africa.

Hence the concern of the African Union to unblock the cereals blocked in the Ukrainian and Russian ports. In a message sent to European leaders last Tuesday, the African Union demanded its support in this management before Putin stating that, otherwise, there would be “a catastrophic scenario of shortages and general price increases” and that “the worst is perhaps to come”. In a recent interview with the magazine Jeune AfricaSall spoke of “famine” and recalled that Africa is “between a rock and a hard place”. “The continent is affected both by the consequences of the war and by the sanctions that affect Russia (…) after two years of the pandemic, the situation has become unsustainable,” he concluded.