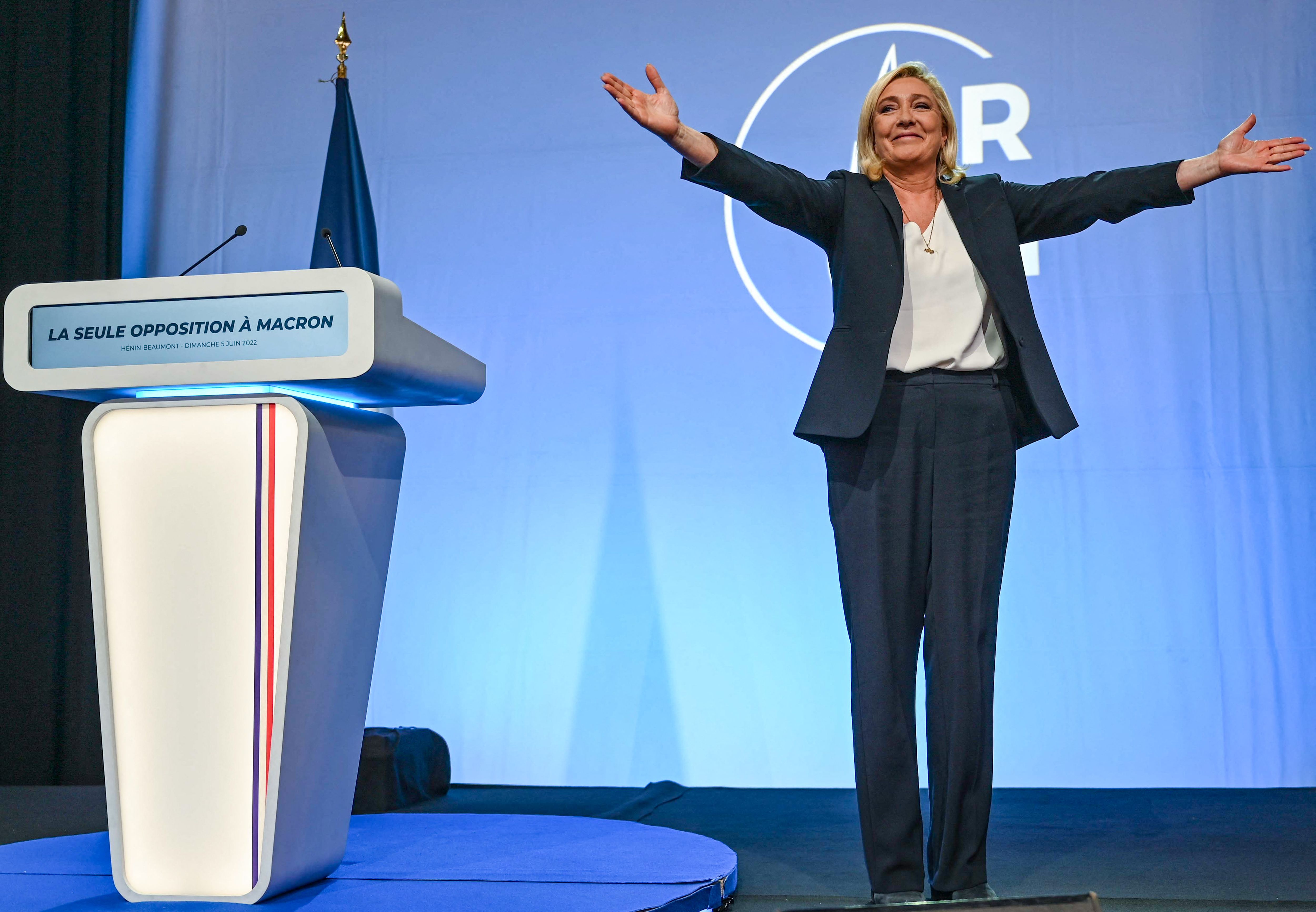 What happened to Marine Le Pen? At the beginning of April, the leader of the French extreme right faced the presidential elections in better conditions than ever. Some polls placed her close to victory. She had softened the image of her and smoothed out the harsher angles of her message. Compared to the other ultra candidate, Éric Zemmour, she almost seemed moderate. Although she lost to Emmanuel Macron, she got the best result in her history: 13 million votes, 41.5%.

That is far away: it seems disappeared. Two months have passed, it is Wednesday, June 1. Le Pen (Neuilly-sur-Seine, 53 years old) gives a press conference in a small, dark room in Calais, the port city known worldwide for being the point of arrival for immigrants and refugees from the poorest places on the planet . He has come here to present, before a dozen journalists, the local candidates of his party, the National Regrouping (RN), for the legislative elections on June 12 and 19. And to denounce that France is on the verge of chaos. He charges at the immigrants, as if he wants to regain ground lost to Zemmour.

“This government is taking us to the abyss,” warns Le Pen, a candidate in a constituency in this northern region. For her, the attacks and robberies before and after the Champions League final between Real Madrid and Liverpool, on May 28, reflected “a country that, due to the pressure of immigration and criminals, becomes a zone of non-general law”. “Give me between 100 and 150 deputies and everything will change,” she promised.

The same candidate, who in April was seen one step away from the Elysée Palace, has resigned herself to not winning the legislative elections and possibly not even being the first opposition group.

“She is a realist,” sums up Jean-Yves Camus, a political scientist at the Jean-Jaurès Foundation and a specialist on the extreme right. “Everyone makes a common mistake when thinking that the result of a presidential election is projected in the legislative ones. It has nothing to do with it”. The electoral system harms it, as well as having decided to go it alone, without alliances with other parties. “If he is lucky, and can achieve it, the RN will have a parliamentary group, that is, 15 deputies, and it will be better than the last time.”

In the first round of the legislative elections, the RN would obtain 21% of the votes, according to a survey by the Ifop institute. It would be behind Macron’s candidacy and Jean-Luc Mélenchon’s left. In the second round, it would be the third or fourth force, with a range of between 20 and 50 deputies out of the 577 in the National Assembly. The first opposition force would be the left.

Mélenchon, a Eurosceptic and anti-capitalist, has campaigned on the grounds that if the French give him a parliamentary majority, Macron will be forced to appoint him Prime Minister. Le Pen, although she has twice been Macron’s rival in a presidential election, assumes that she will not have the majority and, therefore, will not be able to be prime minister.

“There is no chance of this happening,” he settled a few days ago to the France Bleu radio station when asked about this hypothesis. “You have to tell the truth to the voters.” And this is how, unlike Mélenchon, a true phenomenon of this campaign, Le Pen appears blurred and far from the thrust of the campaign for the presidential elections. She is no longer the shadow of who she was just two months ago.

-It is a shame! A shame that you are here!

It is a sunny day in the Calais region. Everything was going well for Le Pen in the market square of Audricq, a town of 4,500 inhabitants, until this man approaches her and starts yelling at her. The candidate, until then, has dedicated herself to taking selfies with women and children.

“What a joy to meet her in person!” one woman commented. Another added: “She is younger than her on TV!” They all call her Marine, as if she were her family. They all ask for the photo and leave. They don’t talk about politics, they don’t ask him questions, they don’t argue. Nothing to do with Macron’s mass bathing in similar electoral events, nor with the president’s endless and sometimes tense discussions with citizens who approach him to complain or criticize him.

Also Read  Caro Quintero, the old capo who revolutionized the world of marijuana | The USA Print

Le Pen continues with the smiles and the selfies while the man continues to rebuke her. A supporter of the candidate replies:

The candidate slips into a cafe, and a few minutes later, her team ushers her into a car and disappears. The visit to the market will have lasted half an hour and most of the neighbors, in the immense Audruicq square, have not even noticed who was passing by. It is, on a small scale, what happens to him in France in the campaign. Le Pen does not count. She doesn’t see it. He doesn’t even expect it in this fight between Macron and Mélenchon.

It is possible that the head of the RN will feel the wear of the presidential ones. And of a result that, despite bringing her closer than ever to the Elysee, was her third failed attempt to conquer power. In the days after Macron’s victory in April, she opted to take a few days off. Later, she refused to compromise with Zemmour, her rival on the far right. Mélenchon did the opposite: say from day one that he wanted to be prime minister and forge a left-wing alliance with environmentalists, communists and socialists. The right and extreme right concur separately; the left, from the moderate to the radical, united.

Le Pen suffers from problems that go beyond the current campaign. The first is the weakness of his candidates: his is a one-man, family party (Marine inherited it from his father, Jean-Marie) without enough cadres to win seats. The second is that Le Pen’s usual voters (the working class and the youth) are less mobilized in the legislative elections.

The third disadvantage is the electoral system. The legislative ones are, in reality, 577 simultaneous two-round elections in 577 constituencies. As in municipal or regional elections, when a RN candidate qualifies for the second round, the rest of the candidates and the majority of voters unite to prevent him from winning. Winning a seat is a feat. This was the case five years ago: after Le Pen surpassed 11 million votes in the presidential elections, a month later, in the legislative elections, his party won eight deputies. Now, although it should exceed the number of seats from five years ago, the 13 million votes in the presidential elections in April will not be reflected in the new National Assembly.

“After getting 42% in the second round of the presidential elections, it would be a democratic scandal if the National Rally did not have a parliamentary group,” Le Pen complains in Calais. “I am shocked to see in the polls that, while the popular and middle classes are the ones that suffer the most from the toxic politics of Emmanuel Macron, they are, apparently, the ones that will vote the least. I count on them”.

Previous article
Russian offensive in Ukraine: Merkel acknowledges that she wonders if the invasion of Ukraine could have been avoided, although she does not regret her decisions | International | The USA Print
Next article
The economic crisis and the opposition to Erdogan spur the discourse against refugees in Turkey | International | The USA Print